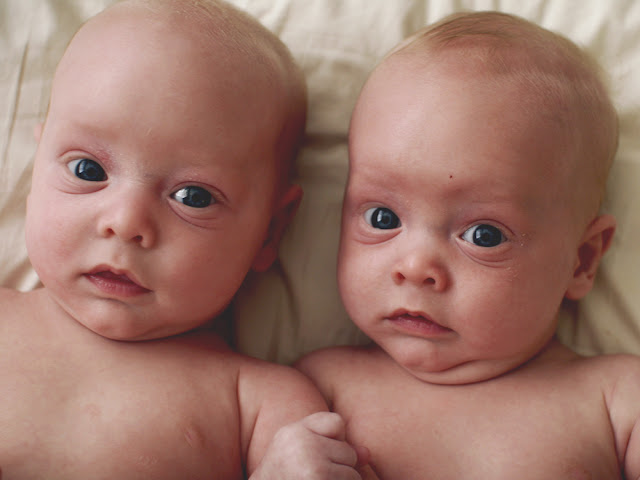 Today my boys are three months old.
Dang. I can't even believe it.
They are observant babies, which is why they always look so solemn in pictures. Even if they're laughing and smiling, they stop and stare the second the camera comes out. They love to look at the camera.
They are wiggly babies. They're always running in place, scooting themselves around the inside of their crib, and punching and kicking each other.

They're snugly babies, almost to a fault. Almost. But not quite. They like to be held. Although recently they've both really taken to the swing, which I never used to use, but they like to sit in it and watch Travis and I move around they room. They'll start to fuss if we leave their eye sight though, which is pretty flattering. Sometimes they'll fuss no matter what I do, until I finally put them in the swing and they calm right down. 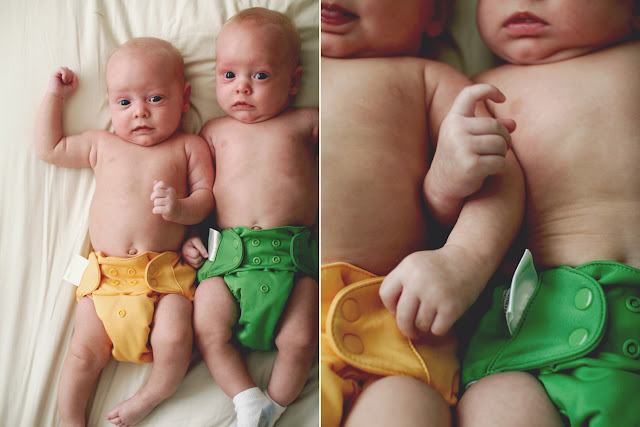 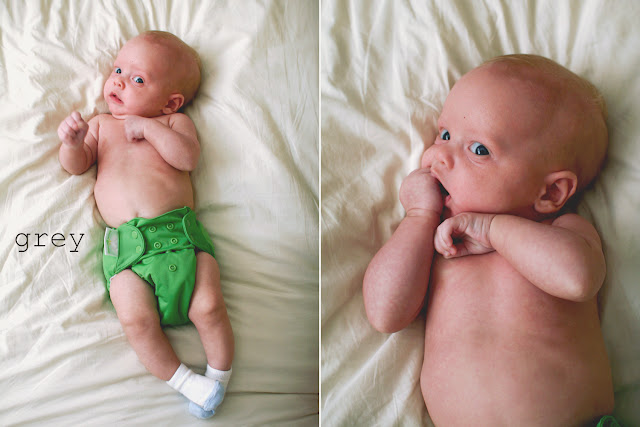 Grey is, as my dad said, "the perfect baby." He rarely fusses, he puts himself to sleep (sometimes) and he eats and gains weight like a champ.
He almost always looks like he's just been caught in the middle of doing something he shouldn't be (see above photos) and he's recently taken to sucking on his fist or thumb constantly.
He's usually content to sit by himself and watch us, without having to be entertained. Especially if he has a blanket his lap to hold and chew on and try to fold.
He thinks patty-cake is hilarious, which I don't understand. 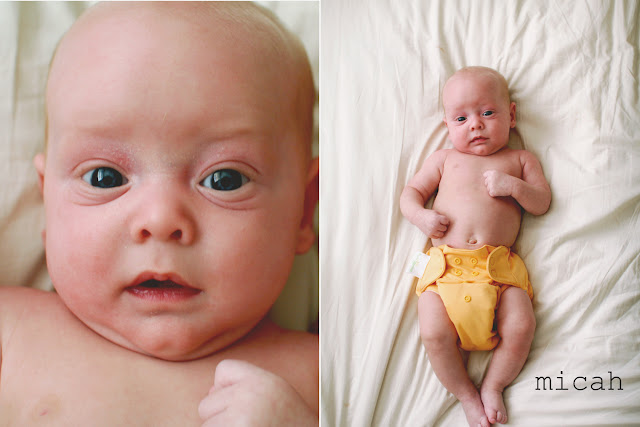 Micah is a little more high maintenance, but only a little. He likes to be held, especially by his daddy. He would rather we were playing, singing or reading a story than just letting him sit and watch us, but even if we let him sit quietly (like when we're trying to put him to sleep) he's really easily distracted by little things like light moving or the computer.
He is SO smiley and it requires almost no effort to get a little laugh out of him, especially when he's eating -since it always puts him in a good mood to have a full belly. He'll just smile, smile, smile and milk will run out of his mouth because he's too busy smiling to latch properly or swallow.
He can click his tongue now, which is pretty much amazing to me. 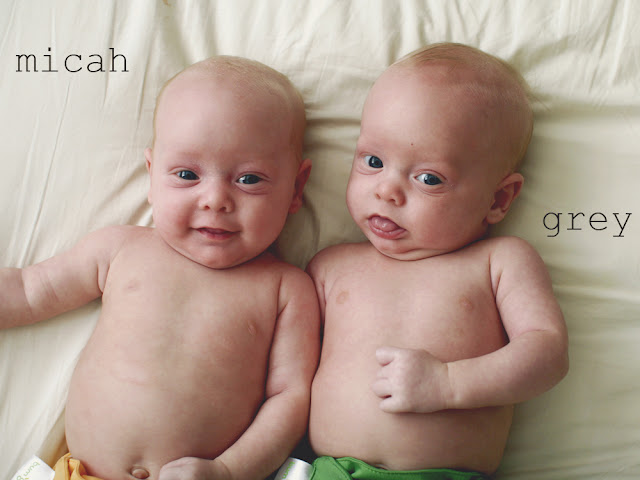 The above picture was one of the only ones that I managed to get that included a smile! They are happy and smiley, but they are too interested in the camera to smile when it's in front of them.
Hopefully the iPhone will remedy that a little, since it' pretty small and boring.
I'll try to post a little video later today or tomorrow. I'll just add it to this post, so check back!
*Edit: Here is a little video of them, taken this afternoon.

And how about a vote for the birthday boys? (Travis wouldn't let me buy them real presents, since it's not really their birthday - and because we used up all our money this month on iPhones... so a vote will have to do.)
Thanks!

Posted by Becky Pitcher at 2:34 PM

OMG! They are just precious! I love their serious faces!

Also, how are you liking cloth diapering? my diapers i ordered should be here tomorrow and I am always curious about other peoples experiences/opinions on them!

I'm glad to hear that you like the dual nursing...i LOVE it! Sounds like everything is working out better. Can't wait to hear more about the cloth diapers :)

They are getting cuter and cuter!! Love them!

They are so cute! I love their chubby little bodies. I hate that they are so hard to tell apart in photos and so easy in person. I love the video it is so fun when they reach an age that you can get them to smile on demand. I miss you babies!

Hi sweeties, I miss being there, can't believe it's been almost a month. The boys look like they have grown so much. Micah looks like he is beginning to catch up to Grey. And they really look so much alike now. The first photo up they really look identical cuz they seem so close in size now. Give them a hug and kiss from G. grandma.

I just have one question and it's: how in the world do you not have one billion followers?

Oh my gosh, they are SO CUTE!!

oh my gosh- they are just darling! So are they identical? They have to be....my gosh....so sweet- good for you, making it to the 3 month mark is HUGE! My boys turn 5 months tomorrow- and I can't believe how fast it goes...your boys are just darling!