Hip Mama gets an iPhone (finally)

Travis and I have joined the throngs of people with *drumroll* iPhones!
Holy cow. It's so much more awesome than my old crappy phone (especially since it went through the washer... and the dryer...).
Pretty much my favorite thing about it is the fact that it's a legitimate point and shoot camera. I have a nice dslr and a nice point and shoot, but it's a pain to carry them around with me.
Even the point and shoot is a pain because it's just one more thing to keep track of.
But now I can take pictures every three minutes, like I want to.
So here are some of the pictures I've taken since last night. I used the app Hipstamatic, which I love.
By the way, what are your favorite apps? Point an app-virgin in the right direction.
We also discovered Angry Birds, which is weirdly addicting. Yeah, yeah, I know we're a bit late. 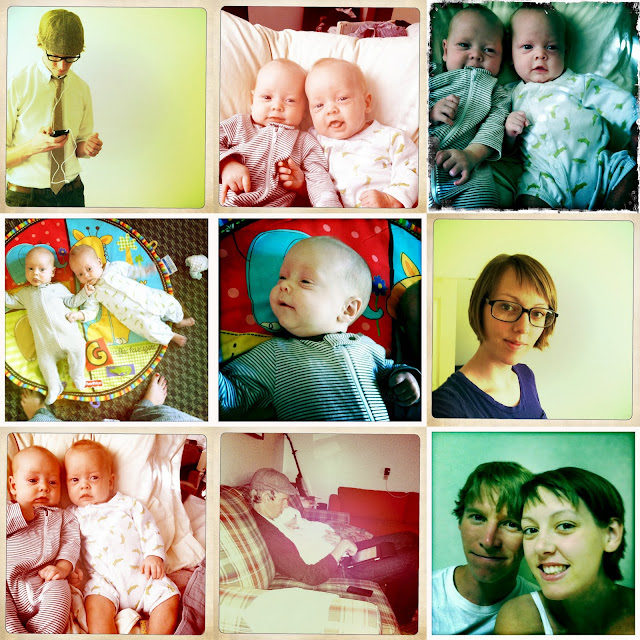 Top row: Travis getting ready to leave for work, listening to music on his new iPhone. Micah and Grey laughing at me saying "Nooo spitting up," in a silly voice this morning. And Micah and Grey trying to figure our what their daddy is doing.
Middle row: Tummy time usually results in the babies on their backs, not their tummies. Micah talking to my feet. (He refused to look up at me) And my new hair cut!
Bottom row: Micah and Grey this morning. Look at them sitting up! Travis last night, playing on the new iPad which is for work... but which I play with all day long. And Travis and I learning how to take pictures on the phone. It looks like I have a mullet, but I don't.

Anyway, I'm pretty psyched about this new phone.
If you have my number in your phone, please text me, because my numbers couldn't be salvaged from my broken phone and I pretty much have zero contacts.
.
Posted by Becky Pitcher at 9:20 AM

Gah! Congraduations on the new iPhones! I finally got one myself a while ago and I'm still in love with it. Download Words With Friends! There's a free version and one thats a couple of bucks (which has no adds) but either way you'll have a great time playing 'scrabble.'

So fun, can I have one? I love all the pics and printed out the collage so I can look at all your cute faces all the time!

I love, love, LOVE my iphone camera and am addicted to Hipstmatic. Here's a couple more apps: Instagram ( i think it's FREE!), Pocketbooth (takes photobooth type pics), QuickPix (full resolution burst mode pics)and you have to check out www.iphoneography.com, it's a whole blog dedicated to iphone photo apps! Have fun!!

Instagram is my favorite of all favorites. You will be addicted!! I also love pinterest,viddy and angry birds is a must until you beat all the levels. haha

My favorite photo app is the instagram. I use this more than the hipstamatic because you can take a picture THEN put it into the app to see which style of edit you want. Of course Words With Friends, AroundMe,Dictionary....