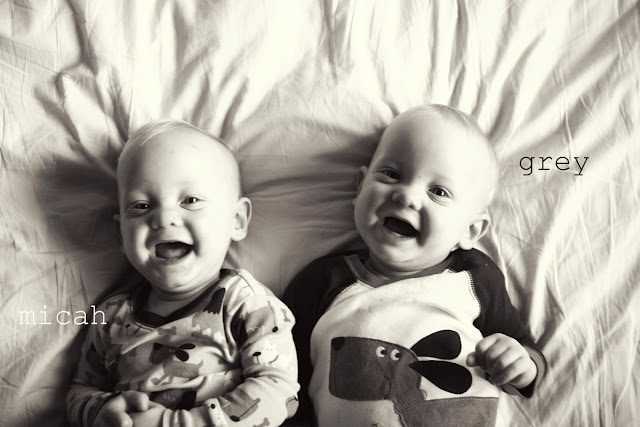 Two-piece jammies are my new favorite, and very grown-up thing for my babies to wear.
They look like little kids.
Children.
Not babies. Little, wittle babies.
Sometimes that's what I wish they still were, but usually I am in love with the stage they're in now. They are so smart, silly, fun, and they have so much personality!
(But Travis is crazy if he thinks I can wait until they're 6 before having more kids, I might not even make it until they're 3!) 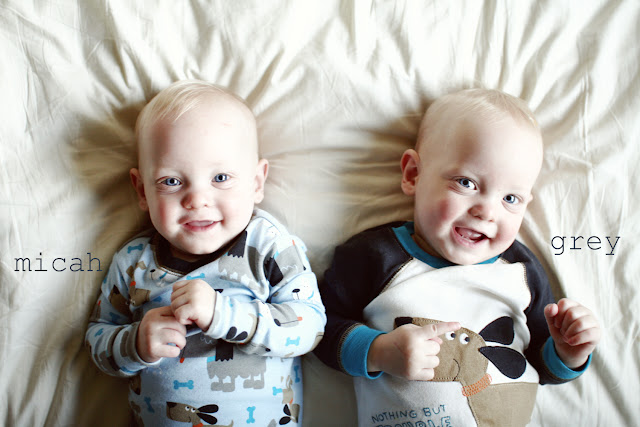 The boys are almost walking, and can stand indefinitely without holding on to anything, and Grey took his first step about 2 weeks ago, though since then he has yet to take more than one or two steps at a time. Micah has not successfully taken steps, but he has tried several times.
They pull themselves up to something, and then scoot their feet as far away from it as they can, and then let go so they're standing a foot or two from anything.
Then they just stand and look around. Grey even bounces up and down without falling. They can take and receive things while standing, they can eat while standing, they can even laugh, or have a tantrum just standing in the middle of the room.
It's like they're different people, now that they're "standing people."
They can also climb. If there are toys too close to the chaise in his room, and something he really wants on the dresser (like my phone, or a bottle) Micah can climb from the floor (using toys to boost himself up), to his chair, on to the dresser! It's pretty terrifying.
But besides that, and getting really pretty good at drinking from sippy cups, they haven't made very many physical strides this month, instead they've been making personal strides, by which I mean, they're figuring out "what people do." 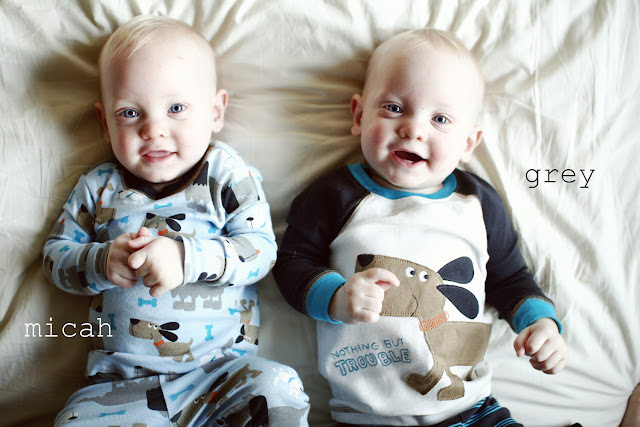 They love to laugh and smile when people around them laugh or smile. They cry or get worried if someone else is crying, and usually try to help comfort whoever is sad. They pat and stroke hair and faces, they hold hands, they high-five and they share!
Micah especially loves to share. He's just as happy feeding Cheerios to me or Grey as he is eating them himself. They hand toys to each other (and then quickly take them back), and even stick pacifiers in other people's mouths. 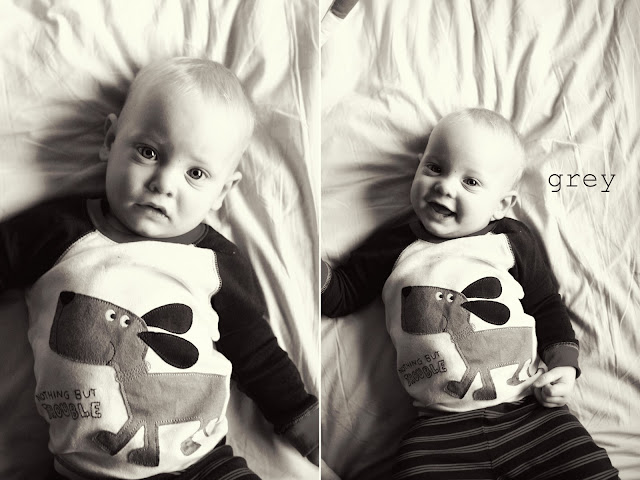 Grey has learned a new (naughty, but hilarious) trick: when I go to lay him down for naps, I rock him and sing him a song. If he is angry and not ready for naptime, he reaches up and covers my mouth! No singing, Mama. If I continue to sing, he'll try to stick his paci in my mouth! Oh my gosh, it's so funny. 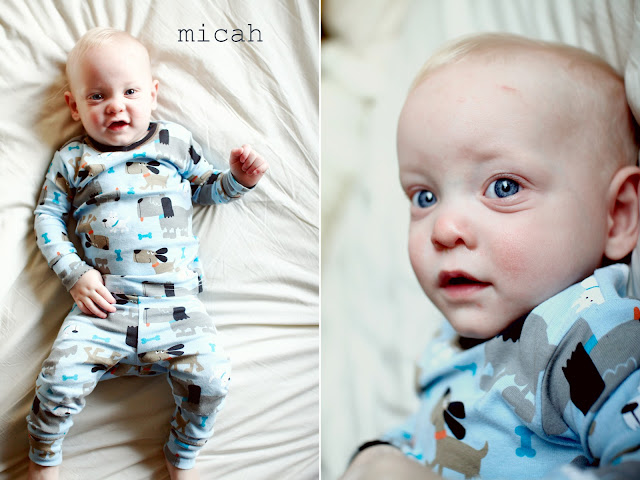 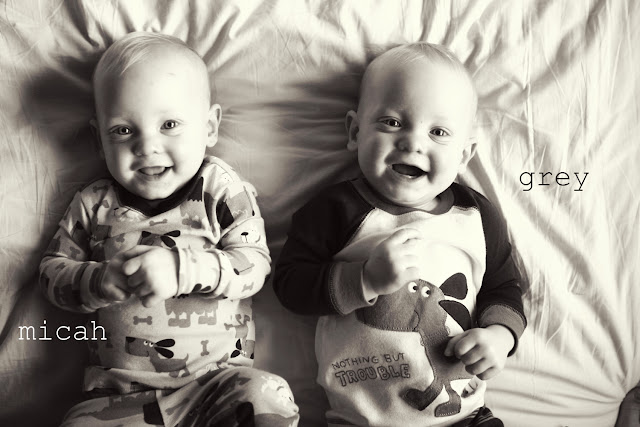 Grey has also been picking up "sign language." And I put it in quotations, because it's not real sign. I wish I'd started teaching them real signs earlier, because Grey has noticed our hand movements and begun mimicking them! He opens and closes his fist when he wants us to hand him something, or come to him and it's so cute! Micah might be trying to sign, but it's hard to tell. The signs for more and all finished are really similar (when I do them) and they are also like clapping, and Micah is constantly doing some combination of the three, where he rubs his closed fists against each other.
I can't tell if he's tried to sign, or what...?
But Micah has been making huge progress with "talking." He's constantly saying "Ba ba ba!" The first time he yelled "BA!" he picked up a ball, and the second time, I was bringing him a bottle.
This led me to believe that he was a genius and was trying to speak. Turns out, everything is Ba. Today for several minutes he told me about Bob Loblaw's Law Blog. (aka Ba! Lablah! La! Blah!) then he looked at his daddy and said "Hey Trabis!" which was pretty freaking cute.
Grey makes a lot of sounds, but he hasn't started using consonants like Micah. Mostly he goes, "Mmm, oooh, moooo, ahhhH!"
And both boys love to "sing" by which I mean that they go "Awwwwaaaahhhh," when I'm singing or music is on.
Oh, and did I mention that my children totally talk to each other? Because they do. IT'S AMAZING! 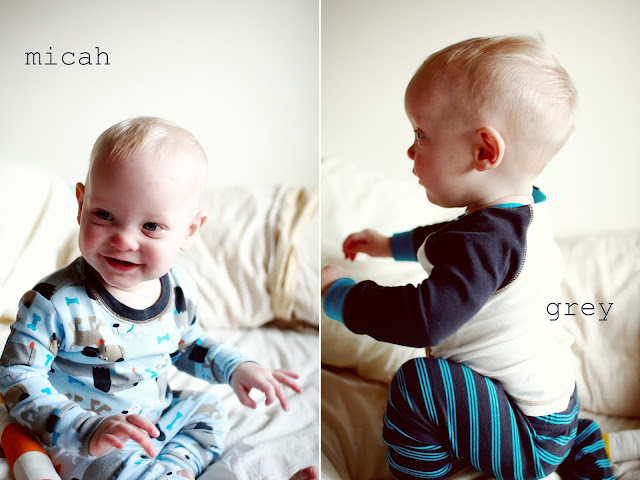 They've also figured out "chasing." If I suddenly crouch down, bang my hands on the ground and cry "That's it! I'm going to GET YOU!" They begin laughing hysterically and crawl as fast as they can in the opposite direction. They usually stop after a few feet though, because they want to get caught. They sit, all hunched over and giggling in mad anticipation for the tickling and kissing that they're about to get.
And if Travis or I yell "Follow me!" and crawl away, they'll follow us through the house, laughing as they crawl.
But again, it's only fun for a few minutes, and then they want to get you.

It is easily the favorite game of every single person in the house.

They still haven't quite figured out waving, but sometimes they wave like crazy. They wave before they leave the room, they wave while I'm putting them down to bed... and sometimes they refuse to wave and stare at me like I'm crazy for trying to get them to wave. 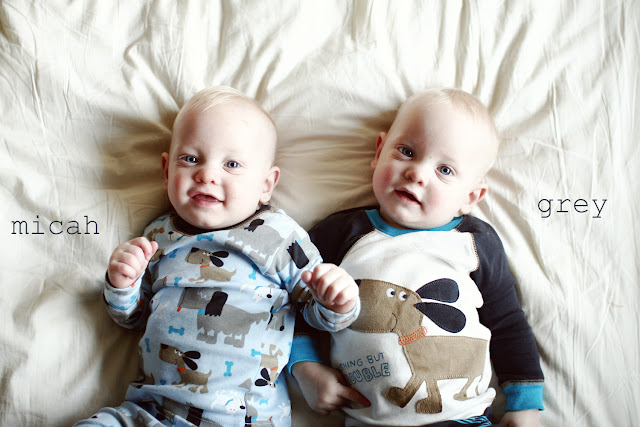 They still don't have any teeth, but literally every single morning I think "when I go get them, they're going to have teeth." I know they're close. I think they'll suddenly have like 6.
Weird. Then they'll be really goofy looking.
Not like now. Now they are adorable.

Posted by Becky Pitcher at 9:22 AM

I love these updates. The boys are getting so big!

O my gosh they are so cute. I want to eat them...my little nephews are adorable!

showing off the Christmas lights photos at church yesterday someone asked how old they were, I thought a moment and said oh my gosh they are 9 months today, I can't believe they are really 9 months. Time flies when your having fun right. And yes I must agree, they are absolutely adorable.

Stop looking so much alike! I want to be able to tell them apart and it's getting harder and harder. Thanks for always labeling the pics. The new pj's are cute, 2 piece jammies are always my favorite too! So many changes every month, so fun, documenting them is awesome!
PS I agree with Brittany's grandma, don't suck on Christmas lights!

They were sure in the mood for photos today!

They are so cute and the light you captured them in is so stunning.
Love how big they are getting.

i thought there was nothing better than pictures of a baby - but there is. pictures of two babies! so cute :)