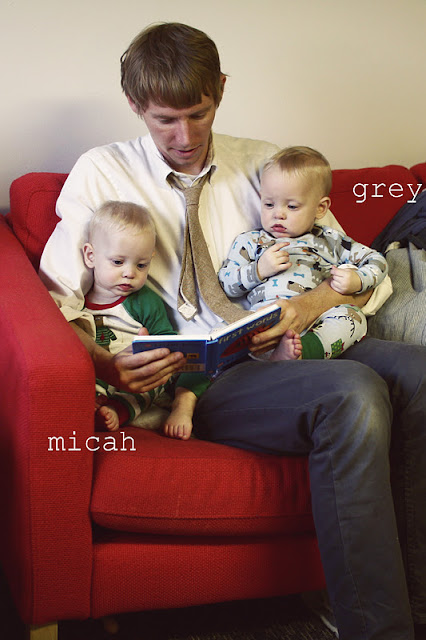 Love this picture of the boys reading with their daddy after church on Sunday. What? Oh yeah. They are in their pajamas. You can go to church in pajamas.

Travis has been sick this week.
Really sick. All week.

On Monday he had a temperature of 104! And even though his temp hasn't been that high since then, he's spent almost every minute of the last week, passed out in bed with a high-ish fever.
Oh, did I mention that he refuses to go to the doctor? He says things like "We'll just give it another 48 hours."
But he is going today. I am forcing him to go.

It's been weird and hard having him sick. He's not the needy-when-sick type like I am, so I haven't needed to be his nurse in any way.  I just refill his water, try to coax him into drinking more, and go and watch Netflix with him during our kids' naps.
I don't have any problem during the day, because I'm used to being alone during the day.
And the kids go to bed at 7, 7:30 - so we just sit in bed and eat and watch Netflix for a few hours and then go to bed.
But that time in the morning, when Travis usually gets up with the boys and I sleep in, and that time between 5pm and bedtime.
Gah! They're killing me!
And we're SO bored and lonely.  The weather has been pretty crappy this week, so we can't go out, and all of our friends have babies, and I don't want to go visit and bring illness with us.
So we just sit at home.
ALL DAY. And the babies whine and are bored. And I am whiney and bored. And poor DadTravis is sick.
We don't need help, really. We have food. We're well-rested.
We've just got a mad case of cabin fever.
And the boys spend a good deal of time every day banging on our bedroom door yelling "Dada, DADA!" because they know he's in there.
During the times when he ventures out to the couch or the kitchen, our home becomes a madhouse. Grey and Micah are so desperate for his attention that they attack him with hugs, kisses, laughter, climbing, and then end up hurting themselves and their brother. Then they are hysterical and want only their dad to comfort them.
And they don't want Travis to also comfort their brother.
And by the time Travis is done trying to calm down his sons... he has to go pass out exhausted again. Boo.

Anyway. Just a little rant.
But maybe they'll give him some drugs at the doctor today.

Posted by Becky Pitcher at 6:49 AM

I hope he feels better soon. I remember those days of being stuck in the house. It's so good to get out sometimes, isn't it?

I still think he has strep, grown ups don't just get high fevers, I'm glad he is going to the dr.