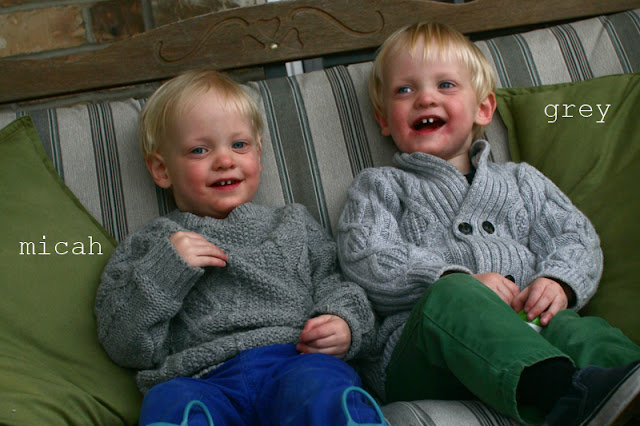 Two. The boys are two. You might have noticed that I stopped doing the monthly updates a while ago. After 18 months progress sort of slows down and I figured I'd do it every six months. But that being said, my kids have changed SO MUCH lately. So prepare yourself for a very long update.
They really aren't babies anymore. I used to say that, because they're so good at running, jumping, climbing, etc. but I really feel like the thing that changed them from babies and toddler to kids is how well they speak.
The boys each have between 200-300 words that they use every day. This includes body names like "icce" and "dose" (eyes and nose), food names like "app-saw," "nolk," and "dawter" (applesauce, milk, and water). They know the names of most objects that they regularly see, door, bed, boots, tree, house, car, dark, etc. And they have lots of commands, which they usually pair with Please and/or a name, so it's like a little, impressive sentence "Up, Pease Mama.""Let's go, Daddy!" "Don't pease, Drey."
In fact, on Saturday Micah said his most impressive sentence (in my opinion) which was, "Mine turn bubbles." It's not really a sentence, but he knew what he wanted and he figured out a way to be clear. 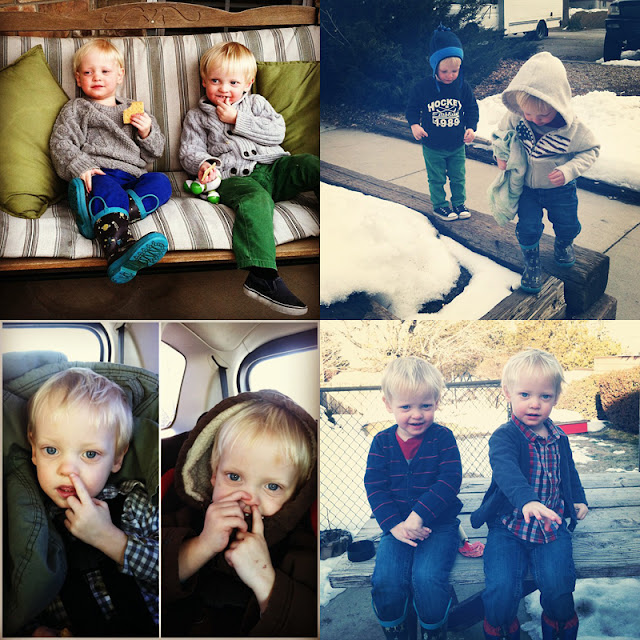 As far as other developments go, the boys can run faster than me some days, love to be outside in the new springy weather, and spend over an hour a day just spinning in a circle in the living room.
They're both weaned off their bottles, and no longer even say bottle (or "doddle"), but when they see a bottle, they announce "Baby."
Because babies use bottles! Yay!
They are still pretty obsessed with their blankets, though (which they call their "Kiki") and want to carry them everywhere. On walks, they often wear them draped over their shoulders like a cape or around their necks like a scarf. On a DAILY basis, they hurt themselves and cry "Daddy!" I say, "Daddy is at work," and the scream, "Kiki!" If they can't have their dad, they want their blankets. I'm only third on the list of comforting things. 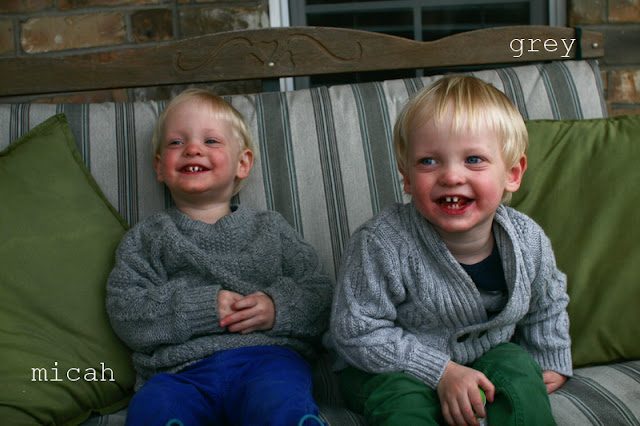 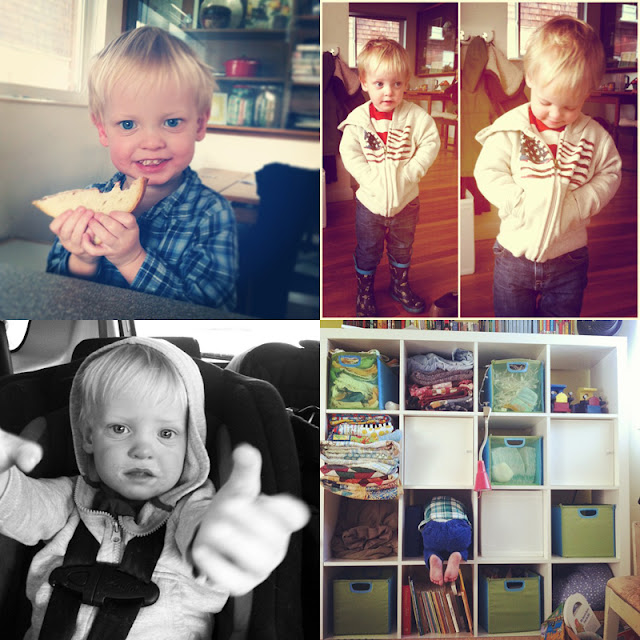 Grey. My oldest and my biggest (if only both by a little.) Grey is so funny. He loves rumpus. He laughs loudly, and shouts enthusiastically. You can ask him a nonsense question, or even something as simple as "Do you want to wear socks?" And he'll shout his response, "YES!"
He delights in pulling all the cushions off the couch and jumping into them. He wants to ride his bike ALL day. If you make the mistake of getting on all fours (maybe to clean up the food he spit on the kitchen floor, or search under the couch for something) he immediately climbs squealing on to your back and holds on for dear life
Grey can jump, with both feet off the ground, and get up like six inches, as well as throw a ball (or any toy) very hard and fast.
He bullies Micah a little, by taking toys that are his, or pushing him out of the way when he wants to be somewhere, but he gets very upset if I tell him that he hurt or upset his brother and is always quick to hug, kiss, and say "Sorry! Love you!"
Currently, Grey's favorite activity is cooking. He LOVES it. I actually feel guilty if I bake while the boys are napping, because it's so important to Grey. He is a very good listener and will do everything from carefully stirring a hot pot of sauce on the stove, to adding a drizzle of oil to a moving food processor, but his favorite thing to do is add flour and sugar to the Kitchen Aid mixer, a scoop at a time, at his own pace, and then lower the mixer himself and turn it on.
I know some of those things seem dangerous, and all are very messy, but I cannot distract him out if the kitchen. If I'm chopping vegetables, he stands on a stool in front of me and I have to hold his hand, holding the knife, and chop.
Every day he asks to "Cook cake" and cries when I say no. He gets out eggs and cracks them in to skillets that he then puts on the stovetop. I mean.
Sheesh. I hope he grows up to be a famous chef so this is worth it! :) 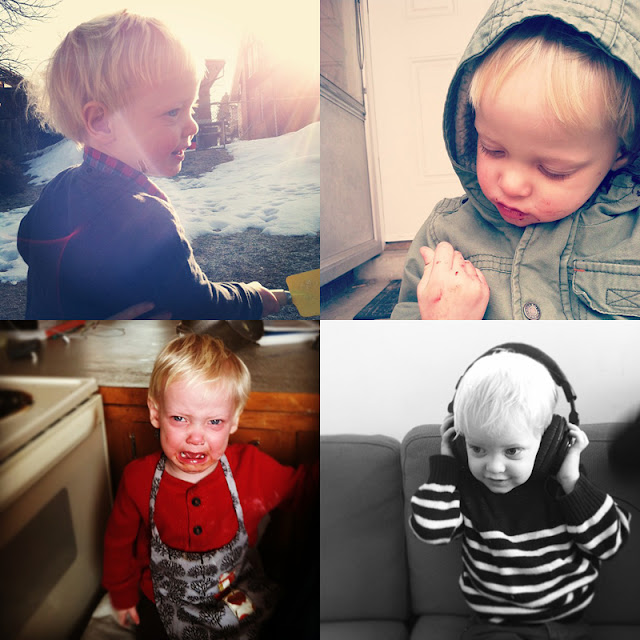 Micah, my little man. Compared to his brother, he is a little less wild. (Compared to the rest of the quiet, still toddlers in church, he is still quite mad.)
He loves snuggling, fort building, hand holding and kisses. He is much more willing to sit and read or play quietly with his "Choo Choo" than his brother. Likewise, he doesn't quite enjoy the messes as much as Grey. If he steps on crumbs with his bare feet, he sits in the ground and whimpers "Owie, help! Yuck!" Until I come brush off his feet. He doesn't have quite as large a vocabulary as his brother, but he uses his words more carefully. Yesterday when he asked "Pooh?" Because he wanted to watch Winnie the Pooh, I pretended that I didn't know what he meant. "Are you poopy?" I asked, "Are your boots coming off?" After a moment of thought, he tried again. "Pooh, Mama. Tigger. iPad."
Yep. That's pretty clear.
Micah also bullies his brother, in normal little brother fashion. He annoys Grey to no end, by repeatedly touching, poking, NOT touching, but dancing around him like a fly he can't quite smack. All day I say, "Micah stop touching your brother. He doesn't like it." And he rarely kisses his brother as apology. (I make them hug and kiss whenever they hurt each other.)
He's not as obedient either, if I put him in time out he sneaks out immediately. If he spills ON PURPOSE on the floor (which is common), he stands there with a little "Whatcha gonna do about it?" smirk on and refuses to clean up.
It drives me a bit crazy, but he makes up for it in sweetness at other times. He loves to sit on my lap and his favorite games are playing "Ni-night" and being a puppy. He crawls around the house on all fours panting, barking, and occasionally jumping up and kissing us like a puppy (which gratefully is not by licking, but nuzzling.) "Ni-night" is pretty much just pretending to sleep, and then popping up and announcing "Awake!" OR by tucking me into my bed, kissing my forehead, tiptoeing to the door and whispering "Ni-Night, Mama."
I fake-snore and he shuts the door, then immediately opens it and screams and I have to sit bolt upright and yell. Then we all laugh, and do it again.
It's my favorite game, since I get to lie in bed during it.  Micah is still obsessed with the men in our family. He constantly asks, "Daddy? Brumpa?" and wants to call my dad on Skype every day and visit Travis' parents every night. He loves looking at family pictures, especially of him and Grey as babies and kisses the pictures and says "Baby, baby. Grey baby."
I think when he grows up he'll be a musician or a writer or artist of some kind. He LOVES music and always heads straight for a piano or guitar in any room and will sit playing, (if his brother doesn't interrupt) for a very long time. He even sings a lot, especially the honey song from the new Winnie the Pooh movie, which he essentially chants all day, "Honey, honey honey honey, honey!" 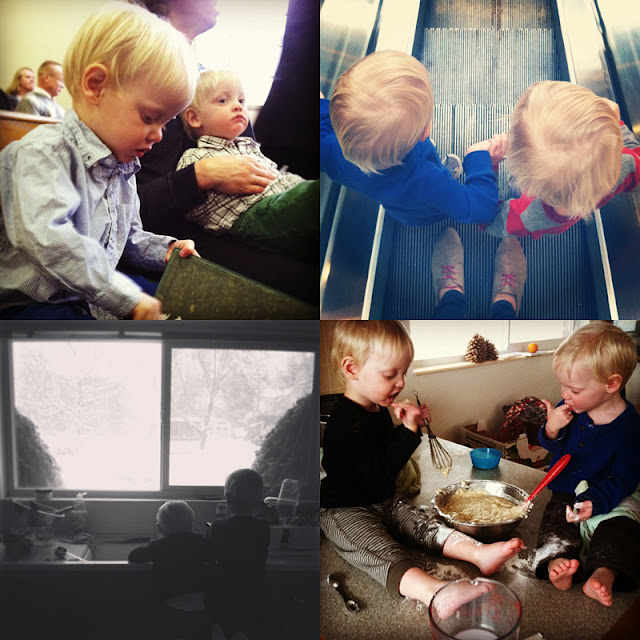 These past two years have been the best, most satisfying, rewarding years of my life. We had so much fun last last year watching the boys learn to talk, move, choose their own shoes, and care about things. I'm pretty excited to see what the next years have to offer. 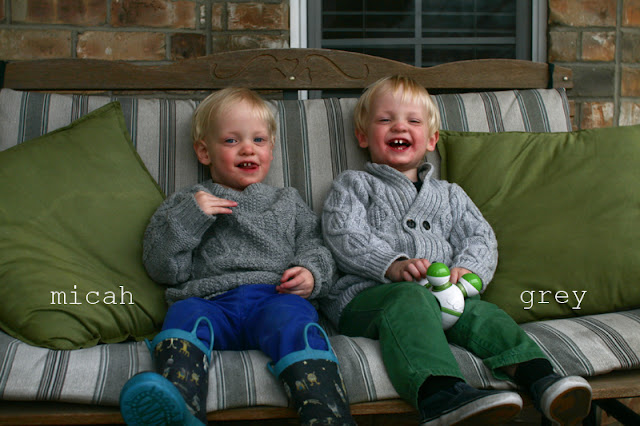 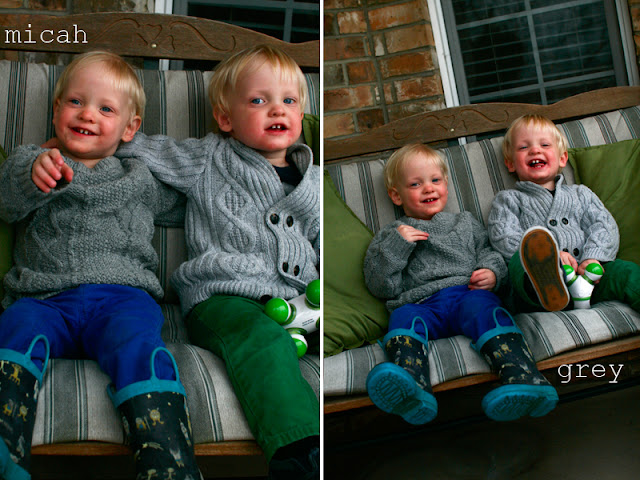 Posted by Becky Pitcher at 8:21 AM

Happy birthday! It's so interesting to me, much of what you describe fits my kids too, when differentiating between the older and younger twin. Isn't it wild to see how different they can be?

Lovely update, I enjoyed every minute of it! You got some good pics of them too!

That picture (I don't know who it is!) of boy holding PB&J sandwich and smiling....seriously?!?! Belongs in a magazine. It is literally picture perfect and I am obsessed with it. Frame it now!
Happy happy birthday to Grey and Micah!!! You should do a post about their birthday presents and what toys/activities two-year-olds are obsessed with :)