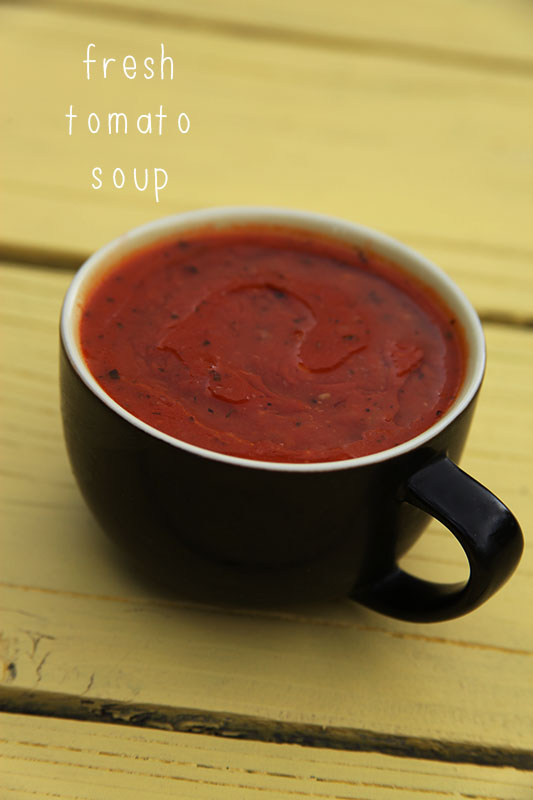 I know what you're thinking. (Maybe.)
It's too hot for tomato soup. It's too hot to cook, let alone bubble soup on a hot stove.
And you're right.

My only excuses are these:
1. This soup is delicious.
2. If you have a bunch of fresh garden tomatoes taking up space on your counter (because you're not supposed to refrigerate tomatoes, you know), this will use them up.
3. This makes a ton of soup. Like, so much. And it freezes really well, which means on those lazy days when you want to make grilled cheese and tomato soup for dinner? Voila! HOMEMADE tomato soup.  And we can all agree that homemade is better, right?

First, a note: You do not have to use fresh tomatoes. You can easily substitute the fresh tomatoes with canned tomatoes, which is what the original recipe called for - but if you've got 'em? Use 'em!

If using fresh tomatoes, blanch the tomatoes to remove their skins. Blanching is just dunking your tomatoes in boiling water.
This is way easier than you anticipate and you can do it.

Start by filling a large pot with water and a large bowl with ice water.
Bring your pot of water to a boil.
While that happens, cut a small X on each tomato (to allow water under the tomato's skin.)
When your water is boiling, stick your tomatoes into the water using a slotted spoon. They'll only need to boil for a minute or two (longer if they're bigger), until you see the skin pulling back around the X you marked.
(Some tomatoes may float, others may sink... doesn't matter.)
Move the tomatoes from the boiling water to the ice bath. After another minute or so (when they're cool enough to handle) you can easily peel away the skins.
Stick your newly-peeled tomatoes into your food processor or blender (or grab a potato masher, maybe) and blend those babies into your desired chunkiness.
I usually try to blend my tomatoes pretty smooth, but there are still big chunks every once and a while, which is wonderful tasting.

If you're using canned tomatoes you can skip that part. If you used homemade tomatoes, set them aside (you can even freeze them for later.) 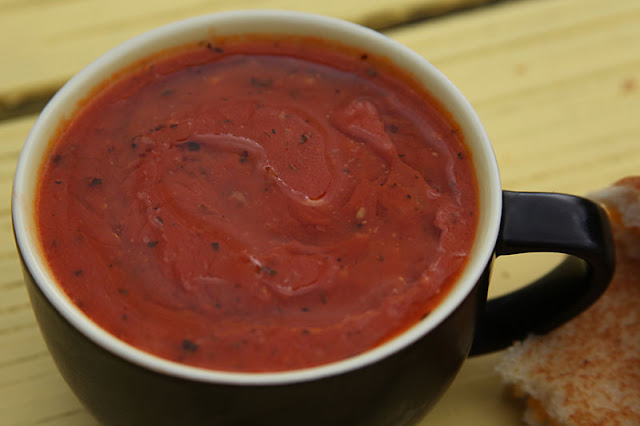 In three tbls of butter, sautee the onion and garlic until it's dreamy and soft. Set aside.
In the pot you want to make your soup in, melt the remaining butter (6 tbls?) and make a rue with the flour over medium-low heat (aka, whisk all the flour into the melted butter.)

Then, whisking while you pour, slowly add the chicken broth to the rue. It will form a thick, buttery gravy (which is why this soup is so deliciously thick).

When your rue is made, just dump everything else into your pot and give it a few good whisks and stirs.
Let it simmer a half-hour (or longer), and then eat it.
Freeze your leftovers for an easy meal later.

This meal is easily doubled (in fact, the recipe originally was twice this size, but that created a ridiculous amount of soup) and my mom always makes it to share at baby showers and luncheons of that sort. It's always a tremendous hit.
Because, did I mention that it's delicious?
Enjoy! 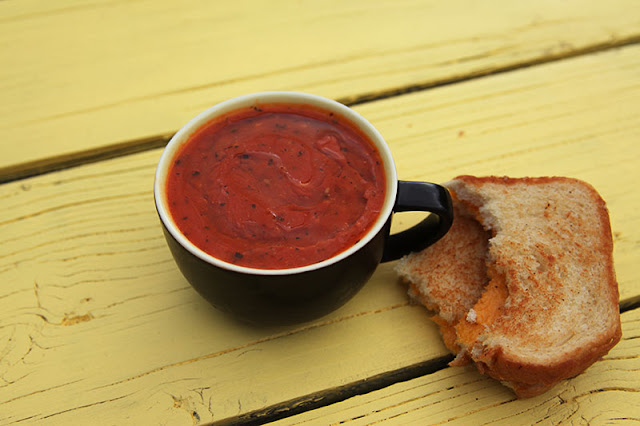 "Why Becky, that seems to be three versions of the same exact picture."
Yeah well, that's cause it is.

And in case you're wondering about the oily sheen on the soup, it's because I drizzled olive oil on the soup for good photo-texture. It's not really that oily.

Posted by Becky Pitcher at 8:51 AM

Looks wonderful! Can't wait for you to come and cook at my house!