There is a little boy who is setting the bar extremely high for all other babies everywhere.
He is constantly smiling and laughing. He now sleeps pretty much through the night and only occasionally wakes up between 8pm and 6am. He eats everything and anything that he can get his hands on. He is 8 months old and he is (drumroll....)
August James! 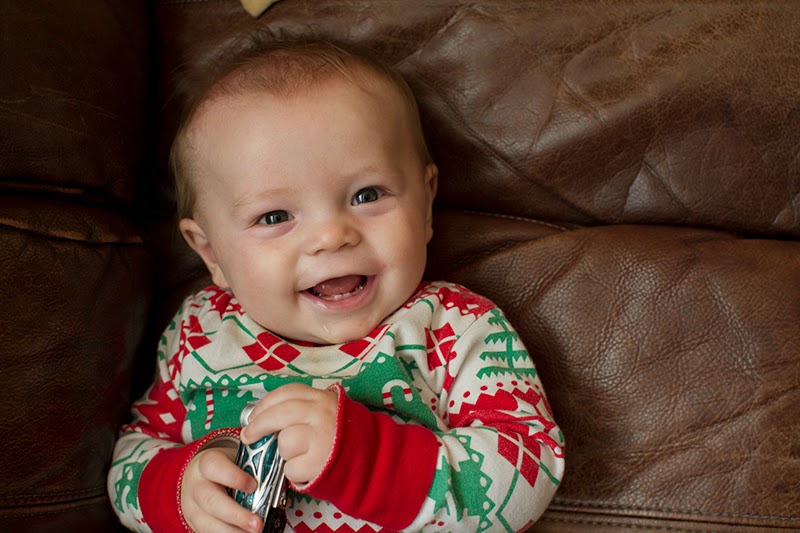 Our little August is such a delight. He is always happy, whether he's being played with and tickled or even ignored! If he wakes up in the morning or from a nap, he usually just lies in bed cooing and talking to himself, and if I'm working on something with the boys or need to get something done- he's also happy sitting and playing by himself on the floor of any room in the house.
He's become even more self-entertained as he learned to crawl in the last week or so- but it's also made leaving him alone more dangerous, as he can now get into lots of things. Our house isn't baby proof anymore!
I'd forgotten that when you leave a mobile baby in the bedroom, and go into the kitchen- a minute later you'll step on a baby in the kitchen!
August loves exploring, moving, and can even pull himself up on and walk along furniture already. My favorite move of his though is when he wants to sit up, and he backs himself up into a seat. He's also (finally) started rolling over and sleeps on his side or stomach now like a little grownup.
August loves his paci at bedtime, but doesn't take it otherwise, and so if I try to give him his pacifier and blanket when it's not naptime, he'll start to panic. 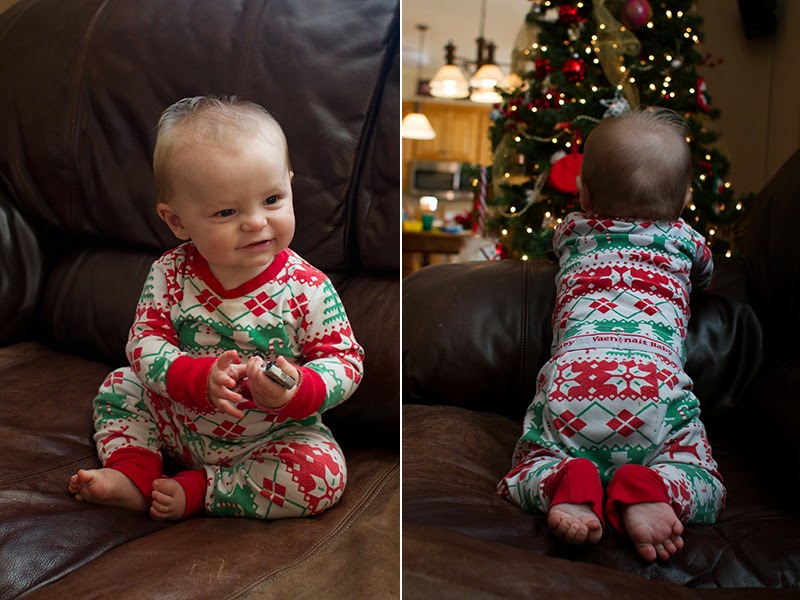 August takes two regular naps a day (10-12 and 3:30-5) and goes to bed around 7:30 every night. He nurses regularly about 5 times a day, but isn't really a comfort-nurser. He nurses to eat, and if his stomach is full of other food (as it usually is), he isn't too fussed about missing his milk.
He eats an insane amount of food. Most mornings for breakfast he has an egg,  a handful of cereal, and either a bowl of yogurt, applesauce or banana.
Lunch is very much the same, he eats as much as the boys! The only "meal" that he usually fills up on breastmilk instead of actual food is dinner, and even then he's anxious for the pasta or bread, veggies, and anything else we have on our plates. 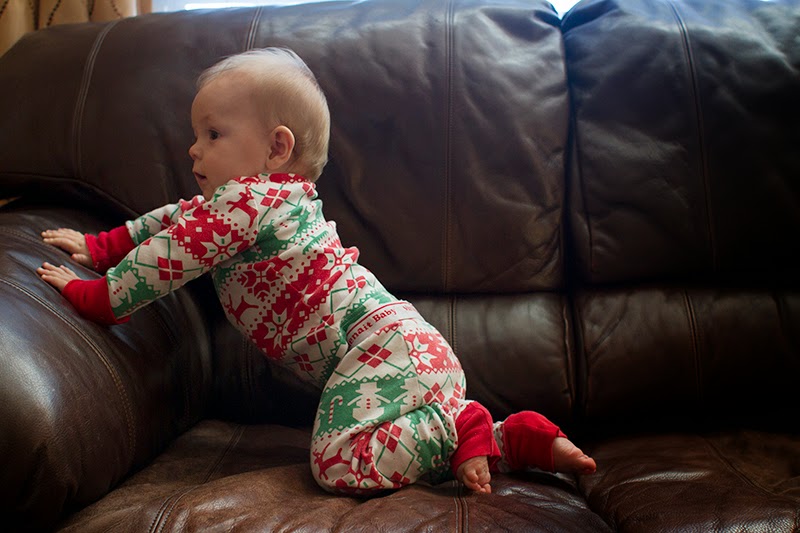 August now his his two bottom, front teeth - and he uses them to their full capacity! He eats all kinds of food that Grey and Micah wouldn't eat or would choke on at his age.  He eats anything and everything, and especially loves feeding himself, but he has never had "baby food" besides flavored applesauce packets. He really likes food that he can hold and chew on himself like bacon, apple slices, toast, or cheese.
When you feed him something by spoon or fork, he has the really cute habit of tasting each bite before he commits to it. He'll lean forward and press his lips against something and then sits back for a few seconds. Then he leans forward and puts his mouth around it, but doesn't take it. Then sits back again for a few seconds. The third time he always leans forward and takes the food, and after that he'll eat each bite without testing it. We have yet to find something that August doesn't want to eat!
He especially likes ice, too. I guess maybe that's genetic? If he sees my big cup of water, he'll pant and beg for it until I give him pieces of ice to suck on. 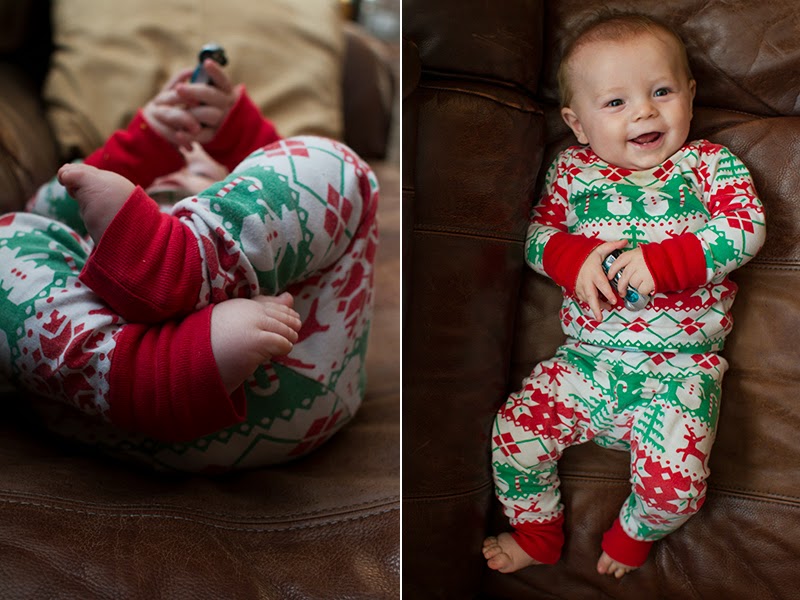 August is also starting to really understand us! He recognizes his name, and will look to Mom or Dad if you ask him where they are. He will snuggle up and take his pacifier if you tell him it's ni-night time, start whimpering pathetically if you ask, "Are you hungry?" and don't immediately hand him a piece of pizza, and crawl (with shrieking delight) into the bathroom if you say, "Do you want to take a bath?"

He doesn't clap or wave bye-bye or anything.  I forgot that babies start to learn things like that so early, and haven't ever tried to teach him. But he's got the pincer-grasp almost conquered. I've started doing a few little signs (food, all-done, milk, and more) with him in the last month or so and I think that he'll copy with food and all-done, but maybe I'm fooling myself! We love this little man, he is so good, so content, and so pleasant- and now that he's learned to crawl- he is so active! The only way I could get lots of pictures was to lie him on his back on the couch and try to entertain him from above! The moment I let him sit up- he was nothing but a Christmas-colored blur.

Posted by Becky Pitcher at 1:04 PM

He is truly so cute. You got such a nice baby. Also I heard that being pagophagic (which is what you are if you are an ice eater) is genetic. It has something to do with iron deficiency. Or maybe its just a learned behavior that your children model because they want to be just like you. Merry Christmas!