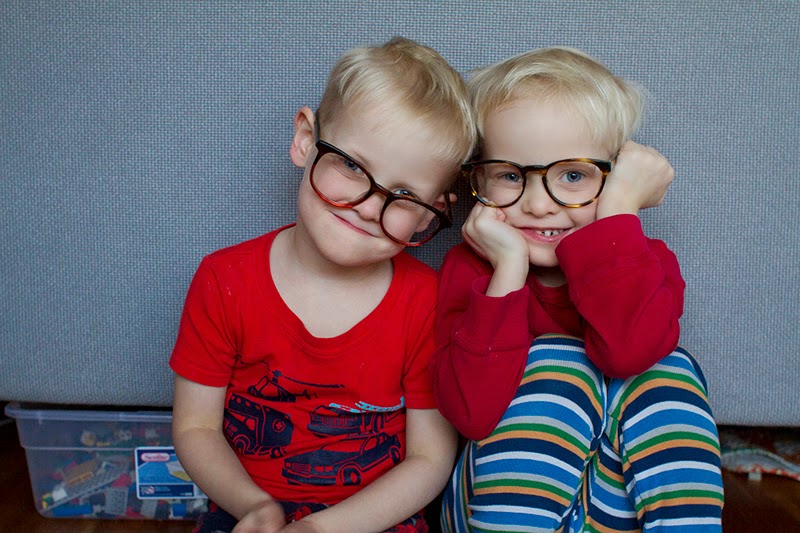 Lately, Grey has been narrating what's happening around us (or what he thinks is about to happen) like it's a story.
The other day, as all three little boys and I were snuggling in bed in the early dark hours of morning, Micah reached over and turned on the light. Grey instantly roared, "I AM TOO POWERFUL! TURN ME OFF! says the light."
A few nights later, as we made Swedish Pancakes for dinner and waited for our friends, he started talking (in different voices), "Soon, Josh and Kelsee will get here. What's that yummy smell? It's Pancakes! says Josh. I want some pancakes, says Kelsee. Mmm, I love these pancakes. I've never had pancakes like this before! says Josh. I haven't either, says Kelsee. I love them!
It's so hilarious, because he doesn't just tell us what he's imagining. He tells it like he's reading us a book!
He's also been confessing to a lot of things that I know he hasn't done. For example, when Travis lost his wallet, Grey was quick to admit "I did it! I hid your wallet to trick you," and when lights were left on in the car and the car died, Grey said, "I snuck out while you were sleeping to turn all the lights on inside the car."
Although when pressed, he'll fess up "It's only pretend. I'm just making up stories for you!"

Stumbling out to the kitchen in the semi-dark a few mornings ago, Micah saw me standing at the counter and whimpered, "Wh-where's my Mama?"
"I'm your mom," I said.
There was a long pause, before Micah finally said, "Okay. Good morning, Mom." Haha, still sleeping?

Grey: Let's go practice shooting our bows and arrows and then- do you know what we will have for dinner? BAD GUYS!

**Kicking a pile of dirty old snow**
Grey: It's a dead snow owl.

Micah: My tummy hurts. That cereal is punching me from the inside.

Micah: You have a beard. You're a beardy little man. You're a dwarf!

Grey: Be Maid Marian.
Micah: No, be just Mom.
Me: I can be both. I can be anyone!
Micah: Be Wonder Woman!
Me: Okay.
Grey: If you're Wonder Woman, then show me that you can jump SO HIGH.

Me: Do you want a cookie?
Micah: Yes, indeed!

Posted by Becky Pitcher at 9:18 AM