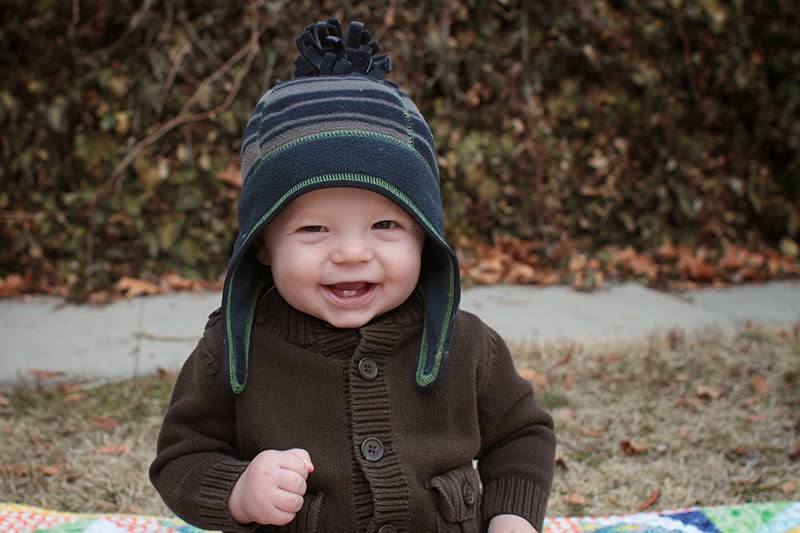 Little August is 9 months old. It's so strange to think that he's been out in the world for longer now than the length of my pregnancy- especially since I felt like my pregnancy was so long it might never end, but I feel like the days since August's birth have flown by!

At nine months old, August has three teeth, can stand by himself for short periods of time, can wave, and sign all-done. He crawls everywhere, climbs everything, and loves to wrestle and tumble with his brothers. He has an amazingly good sense of balance and will crawl all over the bed and couches, right along the edge! without falling. In fact, he'll often crawl to side of the bed (or tops of stairs) and lie down so he can peer over the edge, then back himself up to safety.


His favorite thing in the entire world is taking baths. If he hears water running, he'll crawl to the bathroom and whine and bang on the door. If we dare to wash his hands in the sink and don't immediately strip off his clothes and give him free reign over the water, he'll scream and scream!
Once in the tub, he crawls around, pulls himself up, and collects all the toys to carry to the faucet. He'll sit or stand at the faucet and wave each of the toys, soap bottles, and washcloths under the running water, one at a time- testing them out. Scientific tendencies, I'd say!

He loves to eat and try new things, especially food he can hold himself. But when he's really hungry, he doesn't even try to feed himself! He wants applesauce or puréed food, and seems to understand that he'll get more (and quickly) if we feed him. 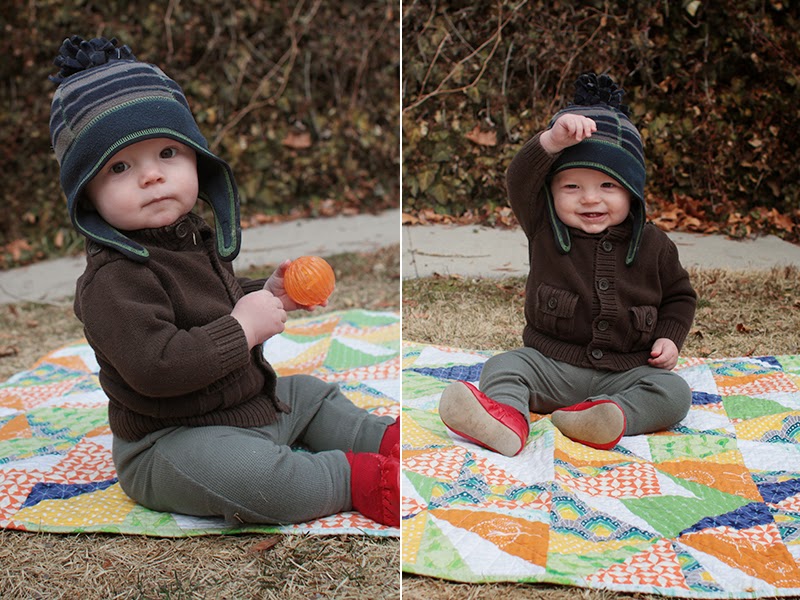 August can wave and besides waving "hi" and "bye-bye," he'll also wave "ni-night" when he's feeling sleepy. He'll lie down on the carpet or a blanket and wave to everyone when he's ready for a nap, and if I pick him up when he's feeling tired or overwhelmed, he'll wave goodbye. A baby that requests nap time! (Above, he's waving at his brother as Grey ran by.)

He also signs all-done, occasionally claps (but more often, he smacks his legs instead of clapping) and does "So Big!" when he wants to show off. He knows that we sign for food and more sometimes, but often can't remember the hand motions, so if he sees something we have that he wants, he'll start waving frantically and smacking his lips.
He smacks his lips to make kissing sounds and "sings" if music is playing, or we are singing ("Ahhh ahhh ah!") but besides that and baby sounds (like mumbling) he doesn't make any other sounds like talking. (Like "Ba!" Or "Goo-goo!")
I'm not too concerned. With Grey and Micah, I followed the charts of What Baby Should Be Doing obsessively and was worried and ecstatic in turn when the boys were fast or slow. Now I've realized that kids all move at their own pace, and August is so good and smart that I don't bother comparing him to any other babies.
He is such a delight, and so unbearably sweet! I often find myself having panic attacks (although they are decreasing in their occurrences) that he's going to die- because God doesn't just give out babies this wonderful! He's too perfect for this world!
Oh. Yeah. I know that's crazy. You don't have to tell me.
But seriously, he really, really is perfect. And I'm not biased, everyone who meets August agrees- he is the best baby in the world.

Posted by Becky Pitcher at 2:05 PM

He is a cutie! Where did you get his shoes?

Hanna Andersson! They're amazing and I highly recommend them for all babies.