My palm is flat against his chest,
his quick heart punching into my hand
-a feeling of pumping I imagine I miss.
A heart removed from the body that grew it.
He arches his back and I feel
his ribs, his body
thin, quivering, light- more like holding
a rabbit or a bird than a boy.
Quick-limbed and breakable, sinews
and strength. He rolls,
pulling my arm with him.
I am a blanket to cover him
and he nestles down, into the curve of my body.
The room grows rosy, his
cheeks flushing pink.
I slow my breathing,
making a deep melody, hoping
his breath will follow.
But he doesn't. His body has
forgotten the rhythm of my lungs.
He moves, twisting and arching away
-giggling and wriggling-
a fish slipping out of my grasp
across the ocean of tangled blankets and arms.
"Mom," he whispers, in a boy voice
that is hardly a whisper at all.
His eyes are wet, wide marbles,
becoming paler and bluer as he stares over me.
"Look at the beautiful sunrise,"
and I can't look away. 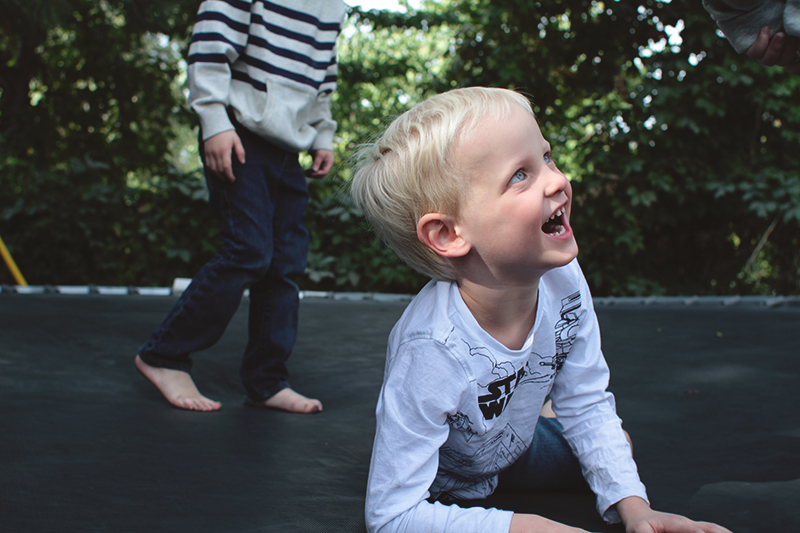 Grey is a jolly giant. 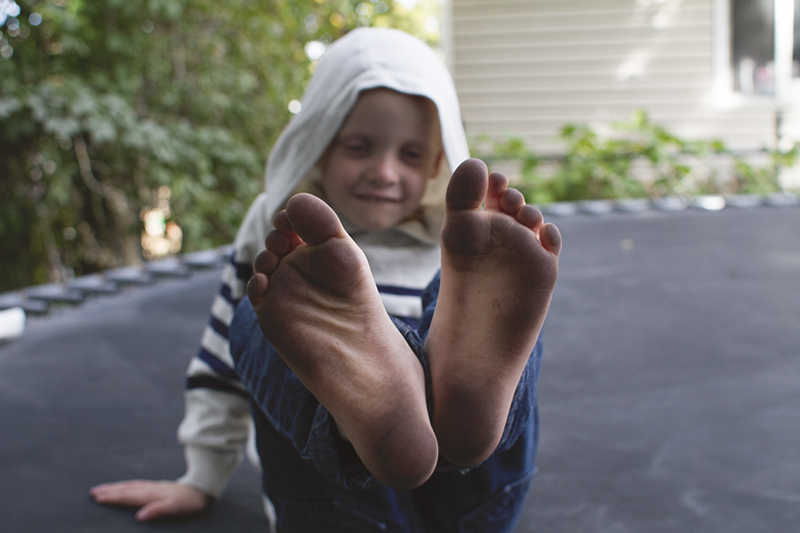 This picture is kind of terrible, but Micah LOVES it. He was so proud of his dirty feet! 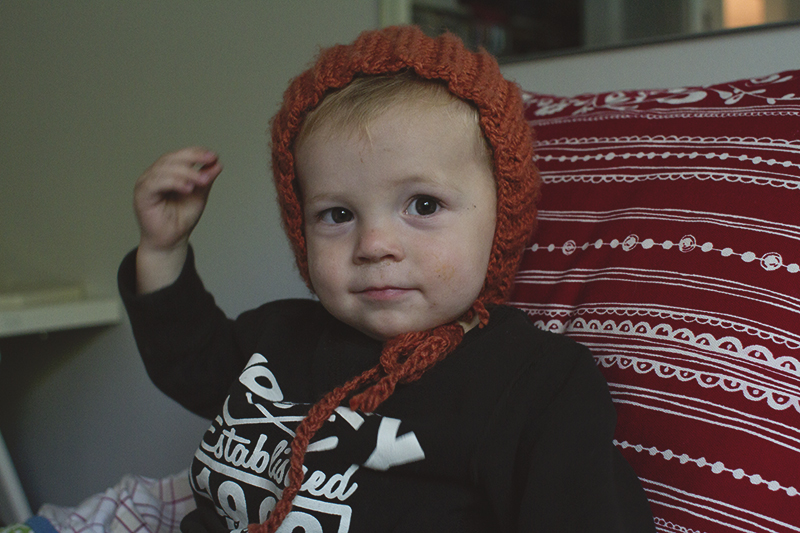 First I made a baby. Then I made that baby a hat.


A few months ago, when I was organizing, packing, moving, rearranging- I came upon a folder of poetry that I had written as a teenager.
I had hauled it around with me for ten years, never reading it or letting others read it, and I felt embarrassed by it.
(In case you've never read a 16 year-old's poetry, it's pretty shallow and angsty.) And so, in a moment of decision (to pack or to toss?), I threw it away.

I am almost immediately regretted it.
But not immediately enough that it was rescuable.
And thus, the poems that I wrote about boys, sisters, acne, learning to drive stick shift: they're all gone.
And it's true, they were poorly written.
Even just today, I found a poem that I wrote when Travis and I were newly married. There are some good parts- "your long nose, long fingers, long legs and long hair- and there's nothing I can love longer than you"
But mostly, it's kind of poorly written.
Robert Frost published his first book of poetry when he was nearly forty.
And maybe he was busy with children, farming, teaching, and all the things that Mr. Frost did. (He certainly was busy). But maybe, it also takes some time and work to grow into your skills.

I don't think I'm Robert Frost. But I often think it will take me a while to be a writer.
It will take years of writing, and sometimes, years of holding babies in between poems. Because I'm not that great at writing AND because I'm pretty busy living life.

But lately I've been on a poem-writing kick. And I am trying not to write on scraps of paper that disappear over the years (as most of the poems I've written have).
And it's extremely weird and uncomfortable sharing poetry here, but I recently received some pretty sweet words of encouragement from a friend that I've been texting poems to.
(Don't you text poems to your besties?)

And the gist of this is, today I shared a poem on my blog that I wrote. And someday when I'm fifty, I'll probably roll my eyes at this poem, the way I roll my eyes that the poems I wrote when I was in highschool.
But that doesn't make them invalid.
I shouldn't have thrown my old poems away. They should have been tucked away somewhere secret, with the highly inappropriate journal entries of my youth.
I can share poems on this blog that aren't joke poems, right?
Okay. I will.
And also, some pictures of my tiny muses.

Lovely thoughts Becky dear. Both in your lead in poem and in your blog. Often when I am reading I wonder how an author came to imagine a certain descriptive phrase that sounds so poetic. It's a gift, and one to be nurtured as you suggest. Also, I suspect none of us are totally satisfied with our own work, so we plod on, doing what we love.
By the way, you once gave me a notebook full of poems. Do you suppose they are the same as those you threw away?