Australians drive on the other side of the road than we do. So I was pretty terrified of driving anywhere alone. The entire drive from the airport to Coolum Beach (about an hour and a half) I was having a panic attack! I kept thinking Travis was driving into oncoming traffic, or going the wrong way on a roundabout! But by the second day, dreading being in our apartment, I decided to tackle driving. I had Travis sit with me while I drove to church, so he could say things like "Stay to the left," and "This is your exit." 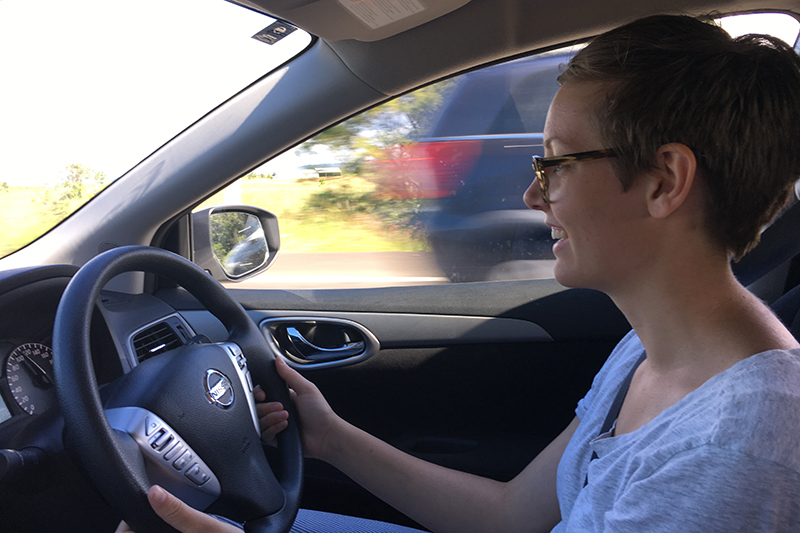 He keeps me calm. The biggest annoyance is the blinker! It's on the other side of the steering wheel, too. So every time I meant to turn the turn signal on, I would turn on the windshield wipers instead! Finally, after two more days of driving- I am doing really well! I didn't get confused or panicked today at all, and I only accidentally wiped my windows once. Yesterday was chilly, so instead of heading to the beach, we decided to visit a national forest for a hike. We hiked Serenity Falls in Buderim Forest. It was so gorgeous and surreal. It really was a rainforest! The bird calls were so loud, varied, and bizarre that it seemed more like we were in a rainforest exhibit of a museum with a tape of animal noises playing! 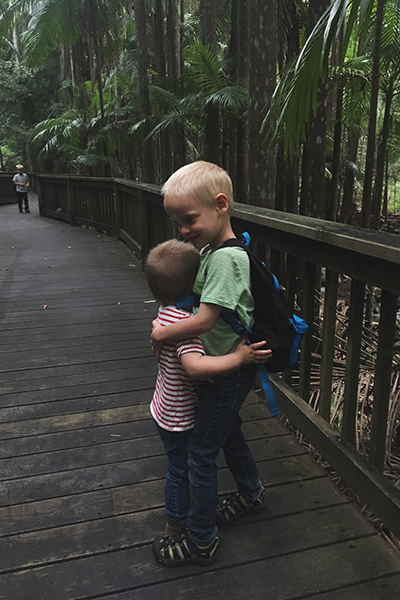 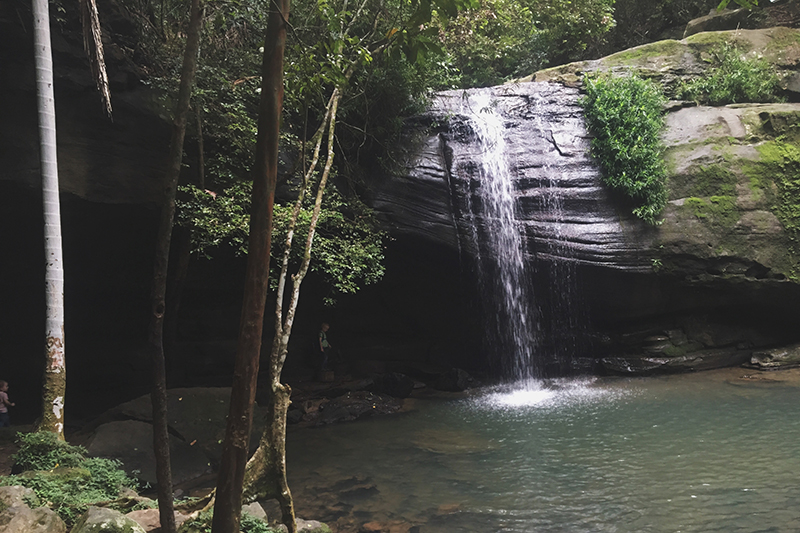 Outside our window here there is a really strange sounding flock of birds. At sunrise and sunset they make the most amazing and terrific racket, and they sound just like monkeys! Grey ran into our room this morning and yelled "We just heard a monkey song, being sung by the monkeys outside!"
The hike was advertised as being "moderately difficult," but only about 5 kilometers total! That's only 3 miles, so I knew the boys could do it. I guess all of our hiking at home has paid off, because the hike was so easy! Even August hiked the whole way himself. And it included lots of steps (often carved into the mountain!) and climbing over and up waterfalls and fording streams. Even when it was just trekking down dirt paths, the roots of so many trees crisscrossed on top of the path that the footing was slightly precarious.
There were lots of vines in the jungle, too, that looked strong enough for Tarzan to swing from- so obviously the boys tried to swing over lots of rocks and rivers! I kept having to remind myself that we weren't in Africa or the Amazon. I wouldn't have been surprised if a panther had stalked out behind us.
The hike was also about a half hour away- it was the first real trip I'd taken by myself with the boys. I didn't have my OZ phone yet, so I took Travis' just in case. I texted one of his employees a bit obsessively- just in case we got lost and needed to be rescued. I told her when we left, when we arrived, when we finished hiking and when we got back to the house. It was the first part of our trip that felt "foreign." 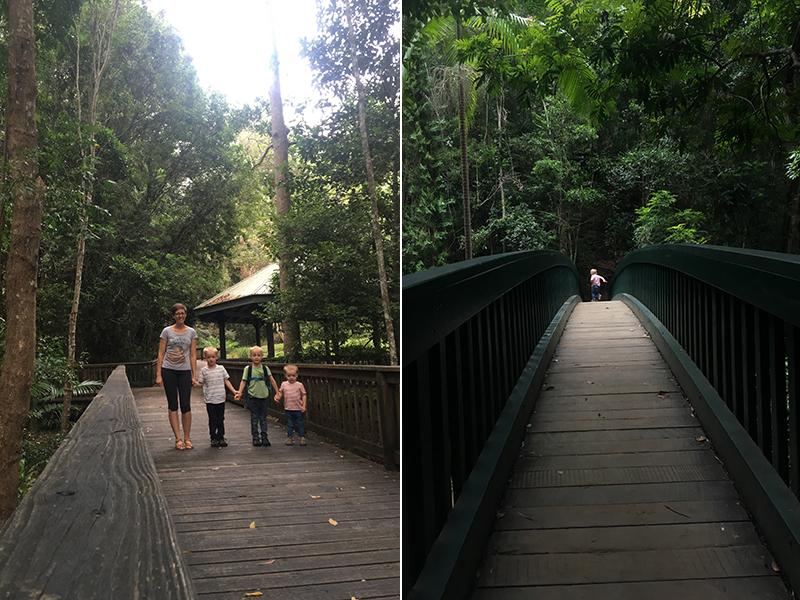 So far, Australia really is a lot like America. Everyone at the beach is blond and speaks English. The grocery store had everything on our list, including hotdogs, Heinz ketchup, corn flakes, salsa, and even gluten free bread and brownie mixes. The roads (besides driving on the other side) are just like American roads. Not like in Kenya or Hong Kong, where the roads are crowded and frantic.
But the rainforest was SO different. Nothing like it in America! It was the first time that I thought, "This really was worth it- it's not just farther-distant-California here!" 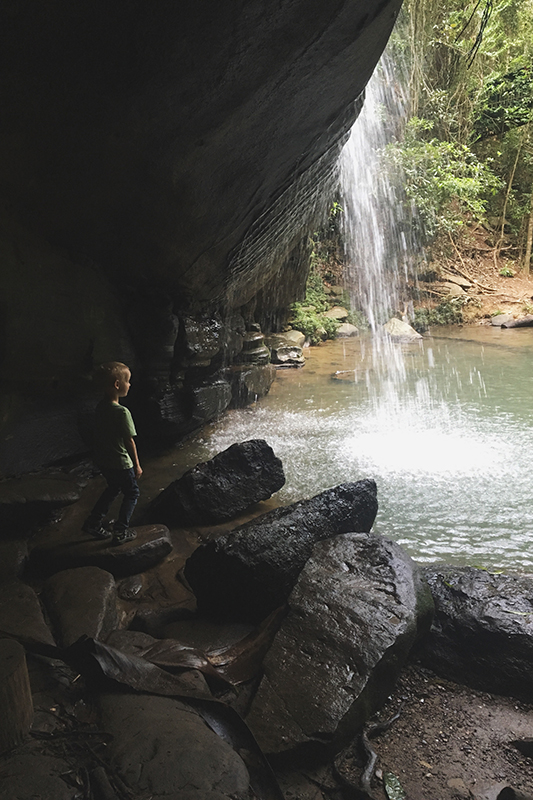 After our trip into the jungle, we met Travis at the beach and played in the sand. The life guards announced that the waves were so strong that they didn't recommend anyone swimming, and if people insisted on swimming- they needed to stay with water at waist level. But there were still so many people swimming! Many people were surfing- I guess they like the rough weather! But we were happy collecting shells and chasing seagulls. The big boys built a giant "force shield" in the sand, which was a pit that they built the walls up around. 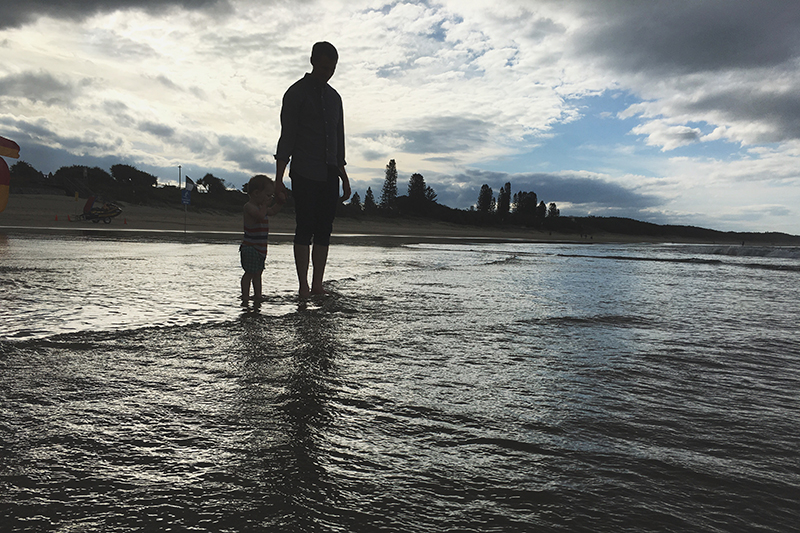 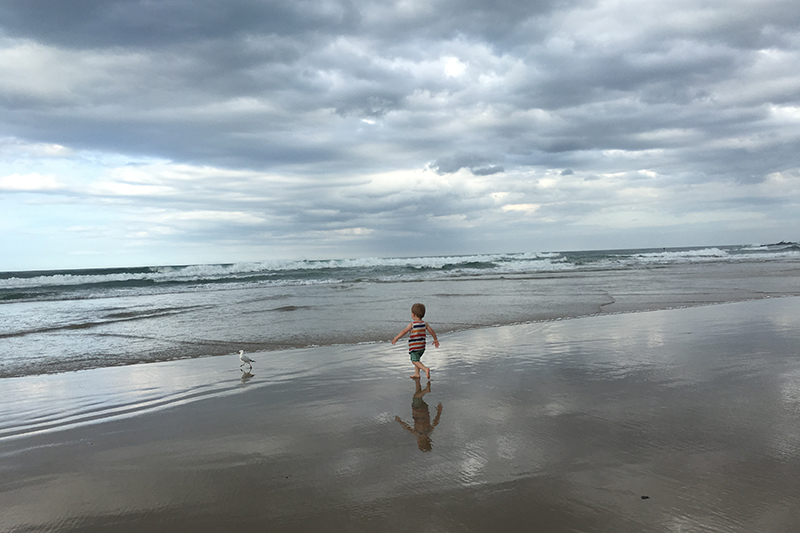 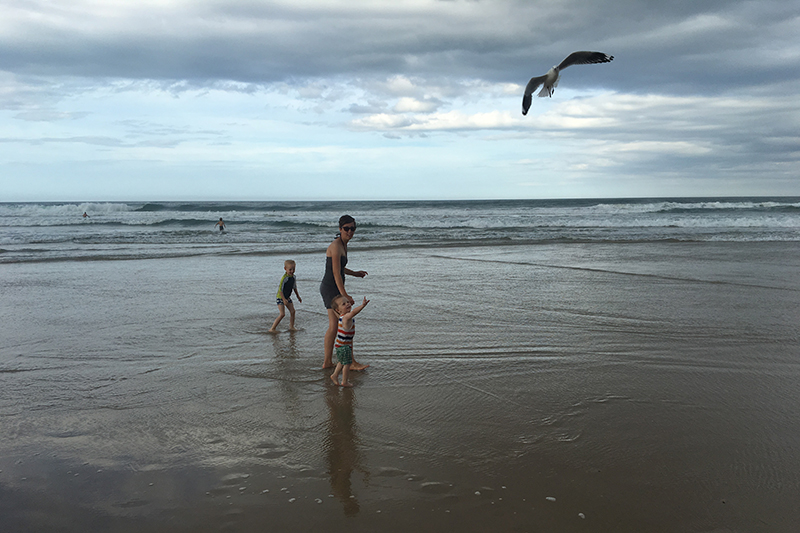 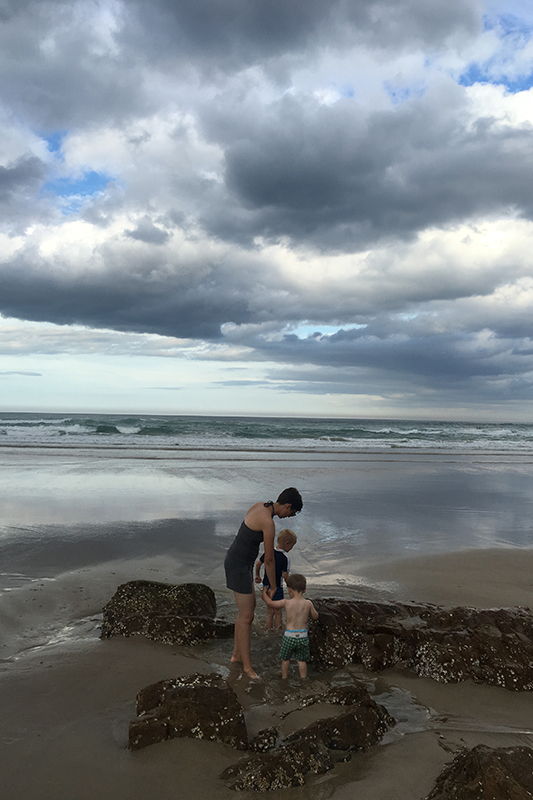 The overcast skies were perfect for us, they made for gorgeous pictures and an empty beach! We don't mind the "poor" weather as much as the locals.

When Travis met us he had good news! He found us a new apartment that wasn't much more expensive, was a close walk to the beach (about a mile down the coast from where we were). We moved in an hour later!
It's awesome here! Besides being by ourselves (hurray!) we have three bedrooms, instead of all sharing one room. Two bathrooms, a washer and dryer, a porch and fenced back yard, even a community pool!
I'm very excited about the pool- I'm going to try to teach Grey and Micah to swim while August naps! 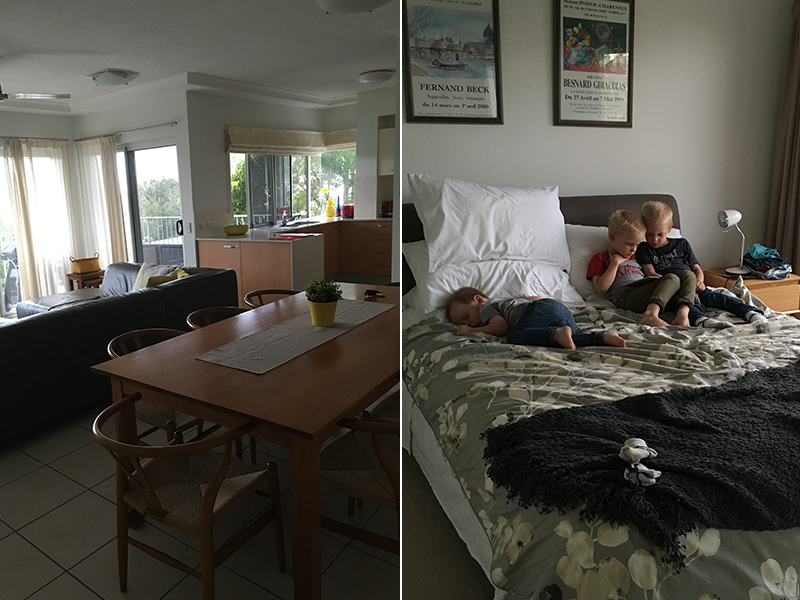 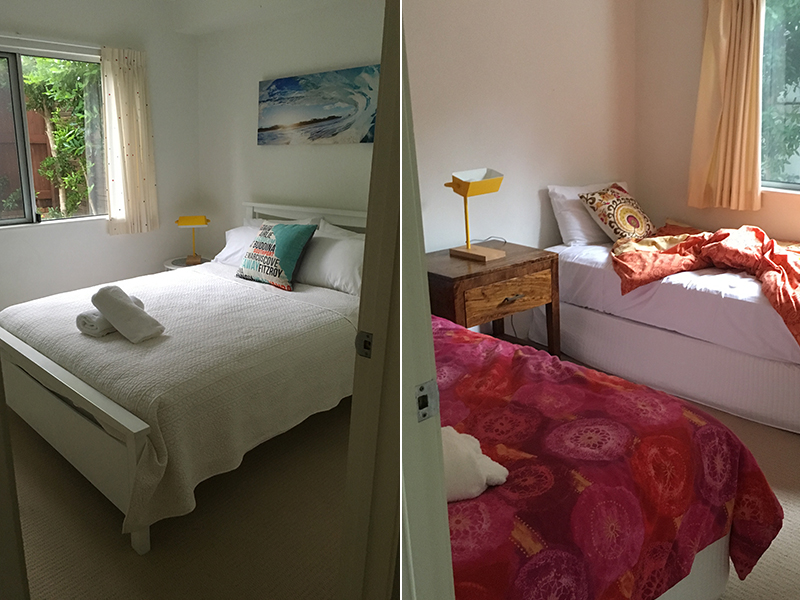 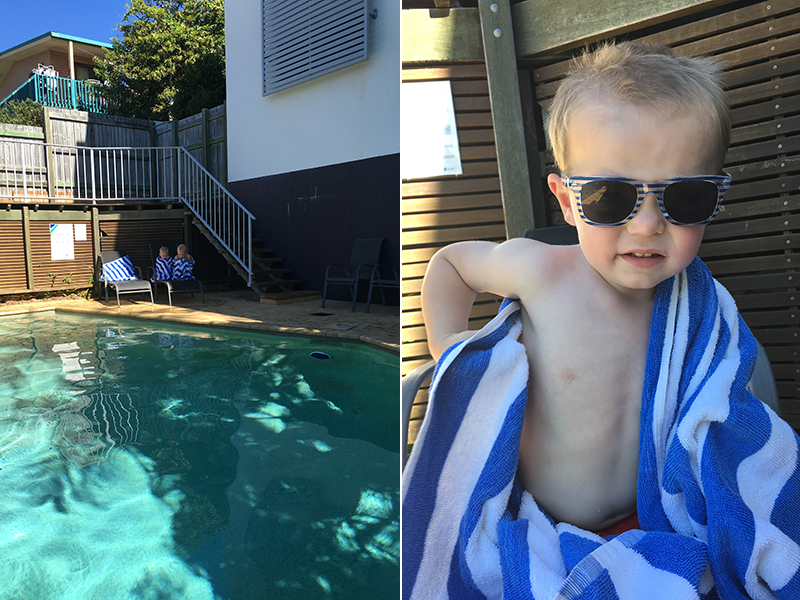 This morning, everyone managed to sleep in until 6am (August has been getting up at 4:30!) and we had a leisurely morning, since we knew we weren't disturbing anyone as the boys shouted over breakfast. (They can't help it. They're noisy!)

We left around 8:00 and headed to the Maroochy Botanical Gardens (about a half hour away), and had fun exploring the forest and hiking trails there. There was a "lagoon walkabout" which was really just a hike around a large pond, and there was a sculpture garden, too. The boys loved the sculpture garden- the statues were all very cool and nestled into the trees around the path. It was the best way to view art with little boys! 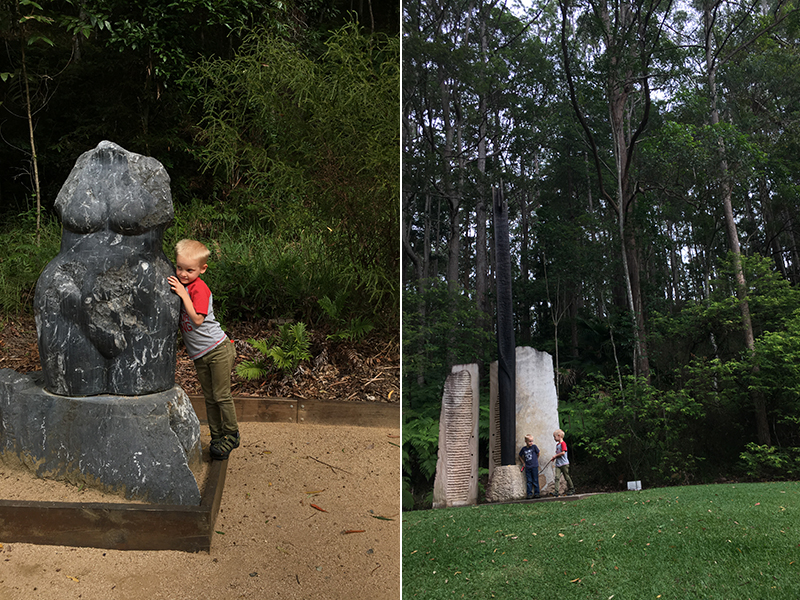 They could run and shout from piece to piece and touch it (sometimes even climb it) when we got to it. They were really interested in the artists' descriptions of the pieces, and I was surprised that their favorites weren't the realistic ones of animals, but usually the more abstract and sort of "unformed" pieces. Grey especially loved several by the same artist that showed the woman's body. He told me, "Here are her breasts and hips. I love this one, because I love girls."
We were told afterward that several koalas live in the sculpture garden and that they mostly just sleep in the tops of trees- but we hadn't looked for them and didn't see them. But one was named Grey! We did see lots of kookaburras, though- and we learned that those are the birds making all the racket outside our windows in the morning! That kookaburra laugh is no joke! 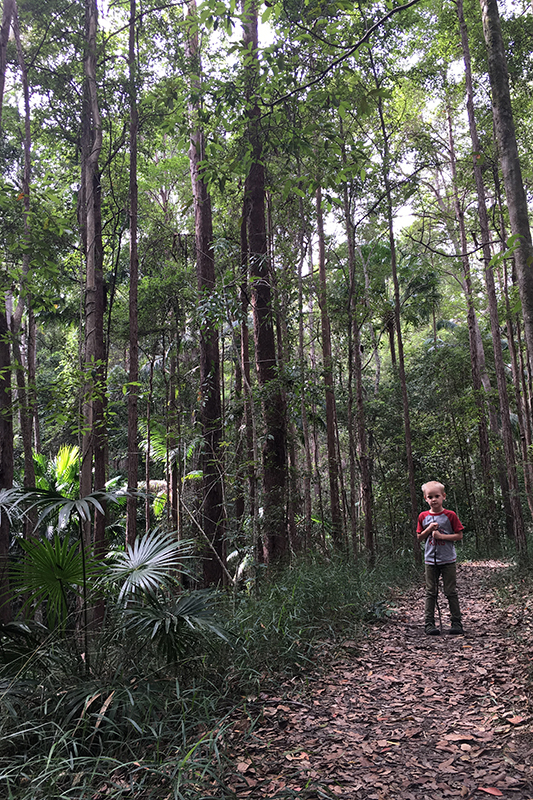 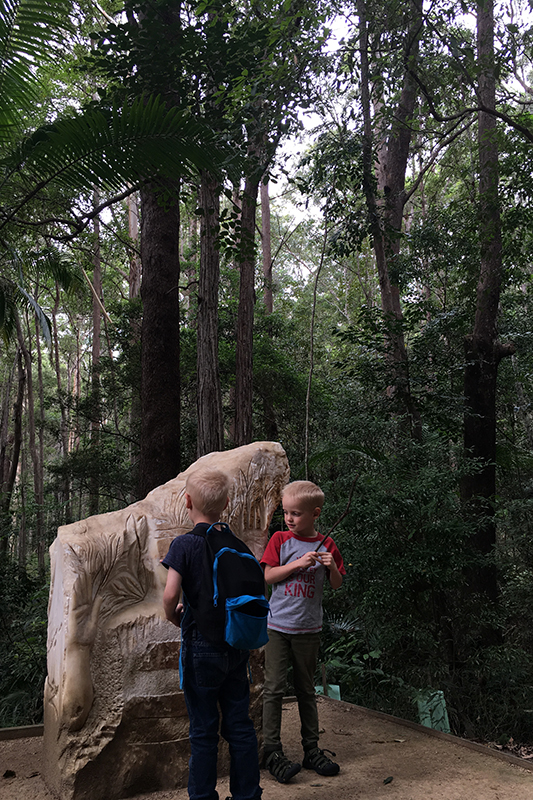 Even at home I feel very accomplished taking the kids all out by myself. Whether it's a hike, a visit to a zoo or museum, or just a park- we need to pack snacks, water, diapers, and often extra clothes! It's so much work getting everyone out and making them all enjoy themselves (and probably carrying someone half the time!)- but here I feel doubly accomplished! We are totally exploring this foreign country by ourselves! 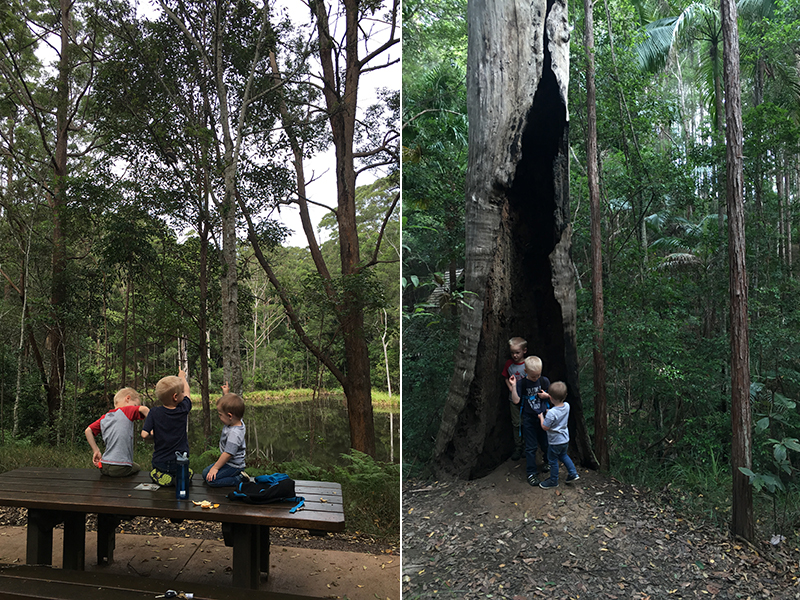 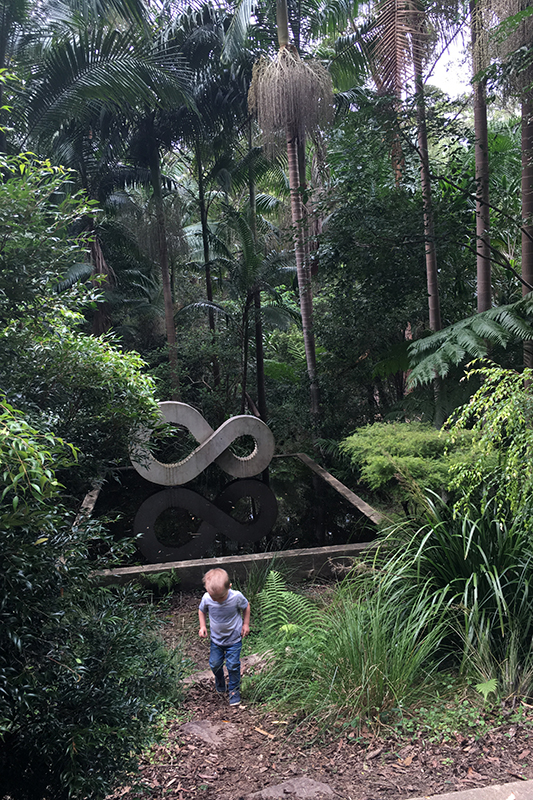 Sure, there are websites listing hikes in the area, and I can use Siri to find GF Thai food with ease, but it's a start!
Travis and I always talked about when we would be able to travel with him and expose our kids to the world. Australia feels like the perfect first international trip with kids (besides Canada, of course)- because things really are easy and possible here. Plus, we'll probably hug koalas later this week. 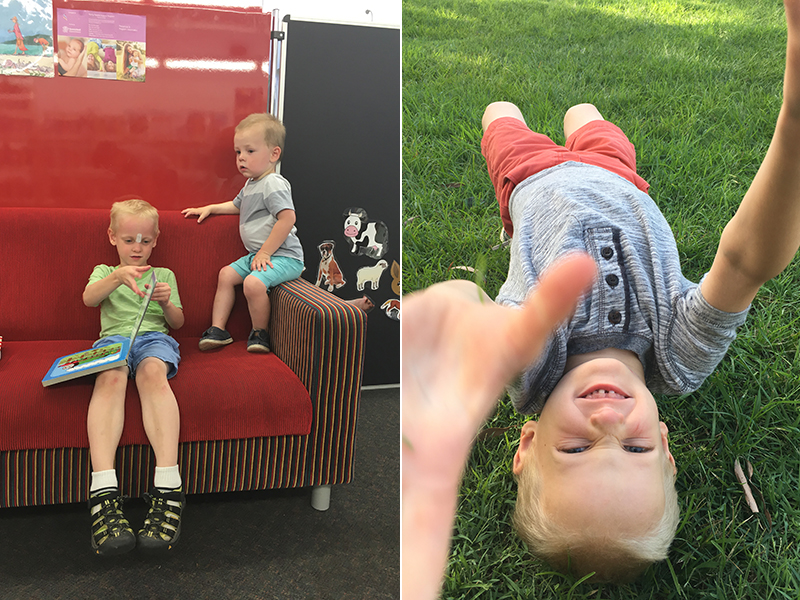 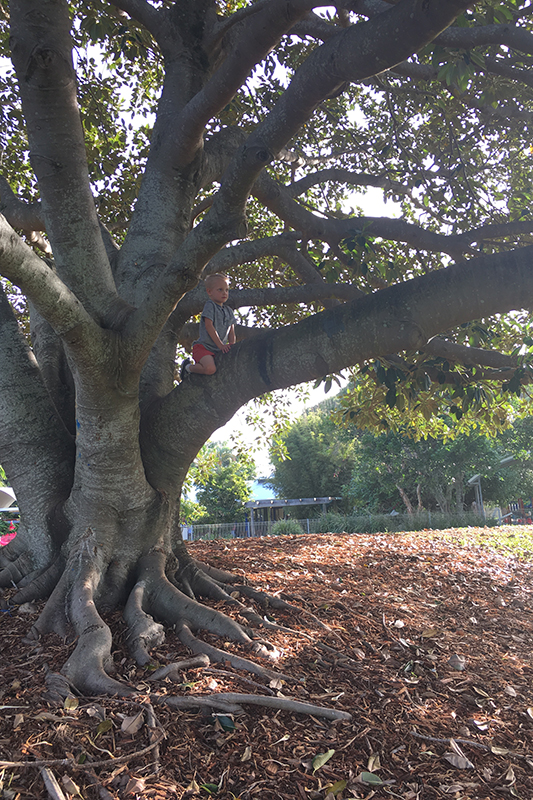 Oh, look! We also visited the library one day (between hikes and beaches!) and it was perfect and lovely, too. Thanks for being so good to us, Coolum!