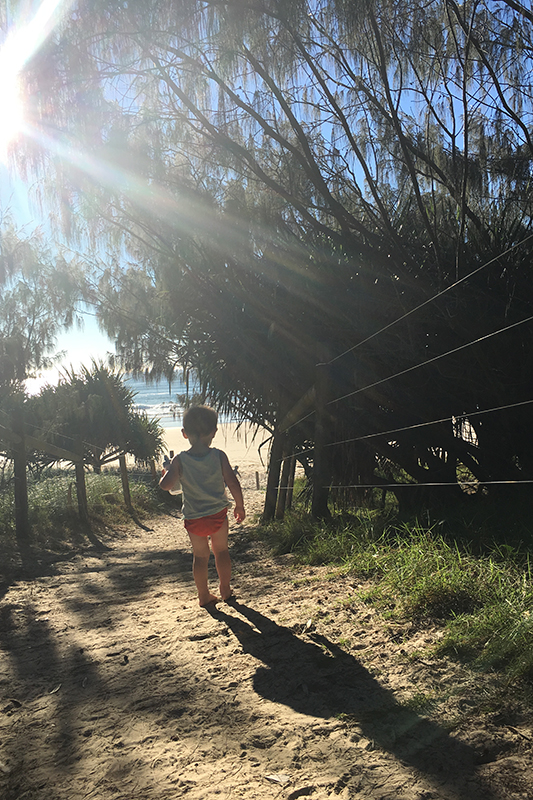 In the week or so since I've written, we've mostly spent our time at the beach, running around from park to park in town, or exploring Coolum Beach itself. So excuse the excess of beach pictures! 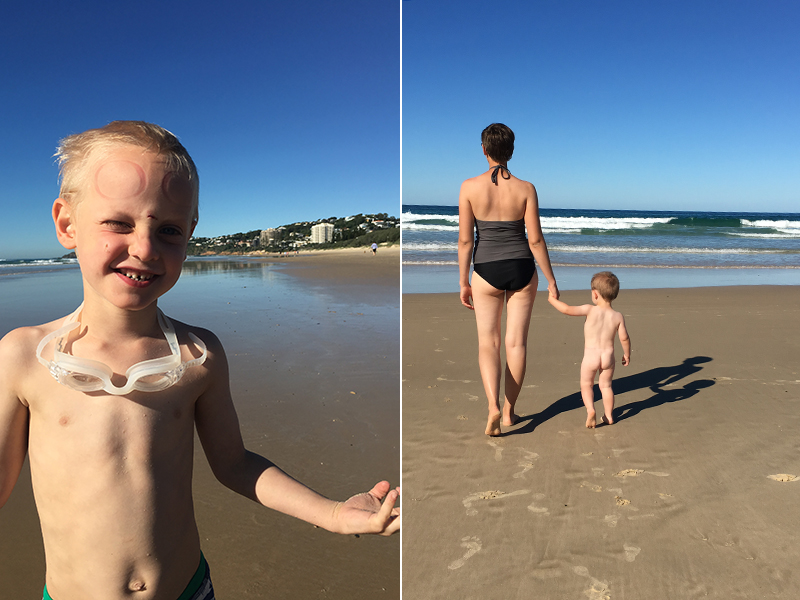 We bought Micah and Grey some goggles this week- to help them feel braver about putting their faces in the water... It hasn't really helped, but they love the goggles anyway. They keep them on SO TIGHT that they always look slightly bruised and abused after they take them off. 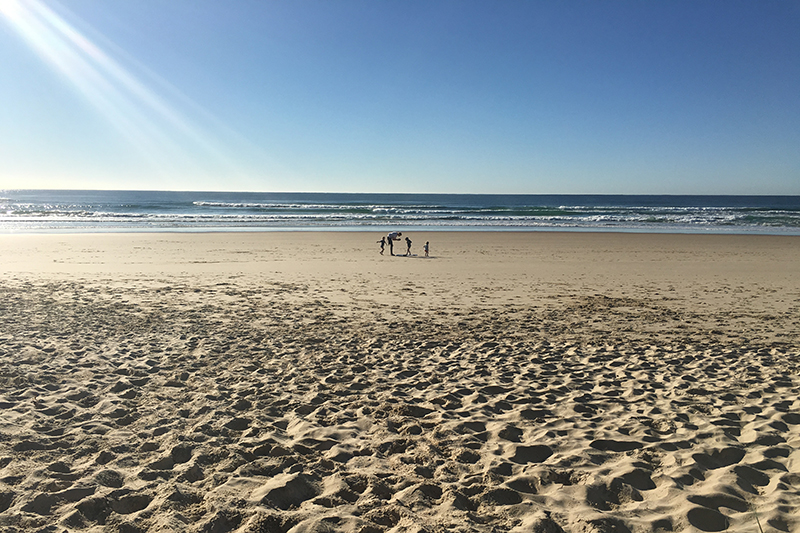 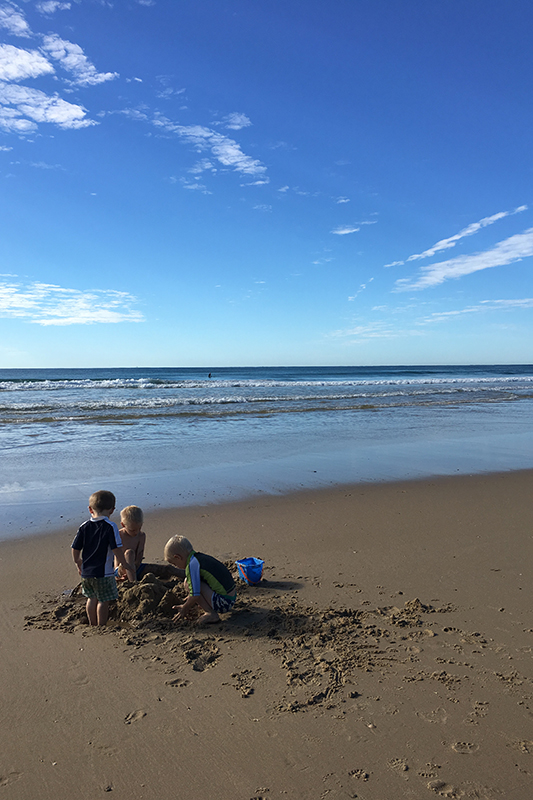 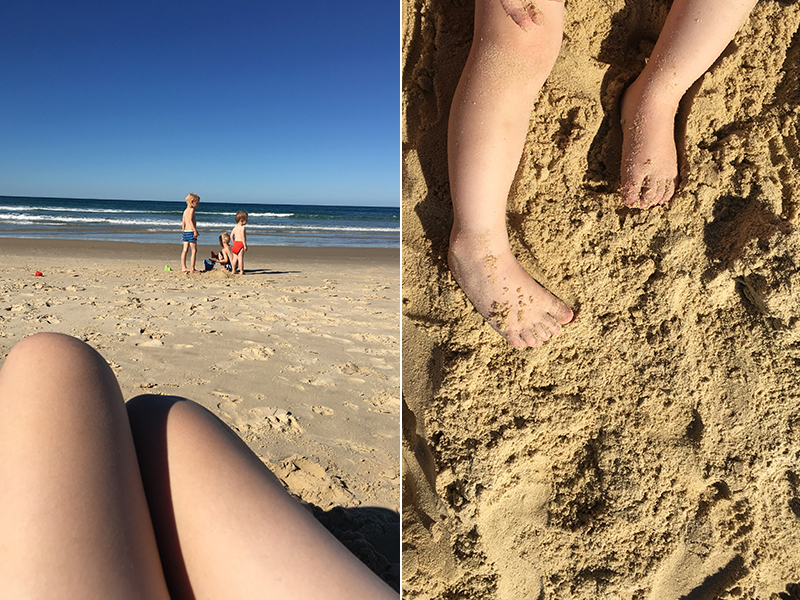 The crabs here process the sand as they remove it from their holes, rolling it in little balls to remove any of the flora they can eat- then they excavate it- making the beach look like it's covered in lace! 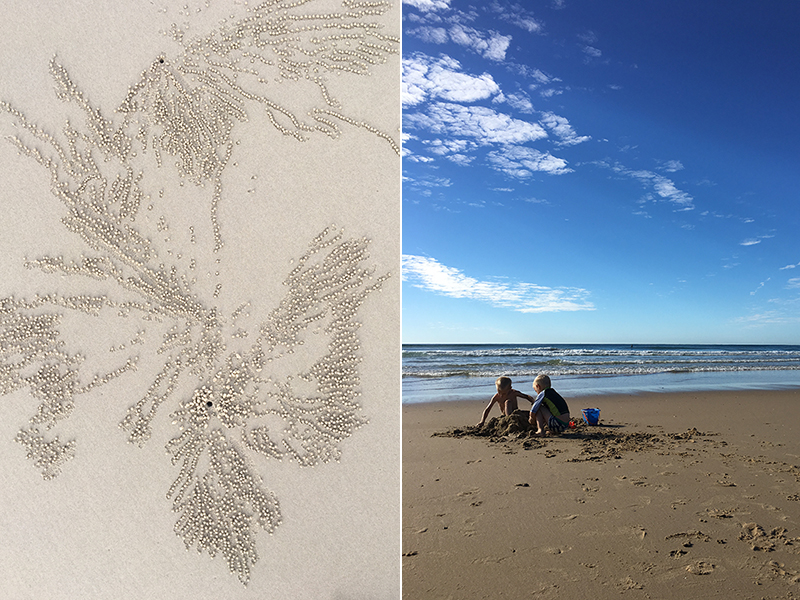 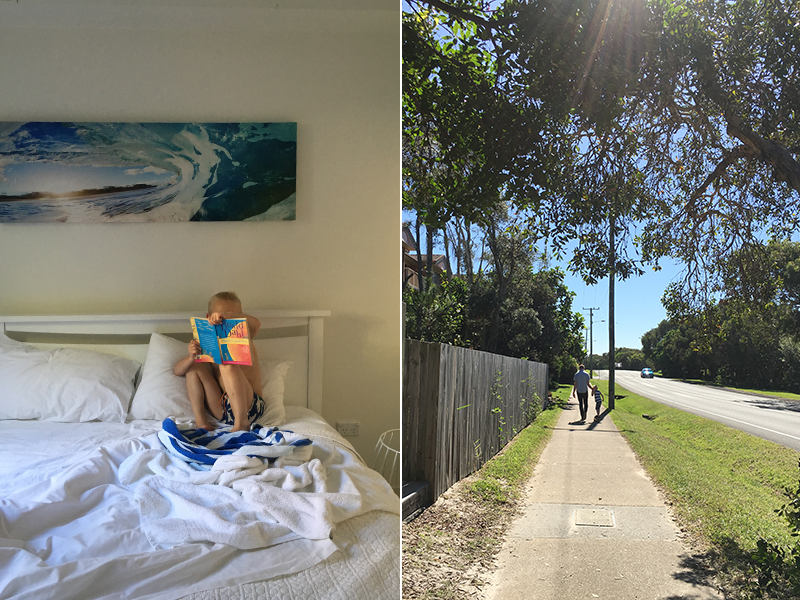 I woke up today feeling fairly sick. My head was pounding and my throat was sore and I am still suffering from a dreadful jet lag combination of insomnia and exhaustion from pregnancy.

I was so grateful when Travis said that he didn't have to work until noon! He came with us to the beach and surfed and played with the boys while I laid in the sunshine, and then- miraculously!- Joe called and said that their model for the day had fallen through. They were going to work on some smaller things and try to line up a new model, but didn't need Travis at all! 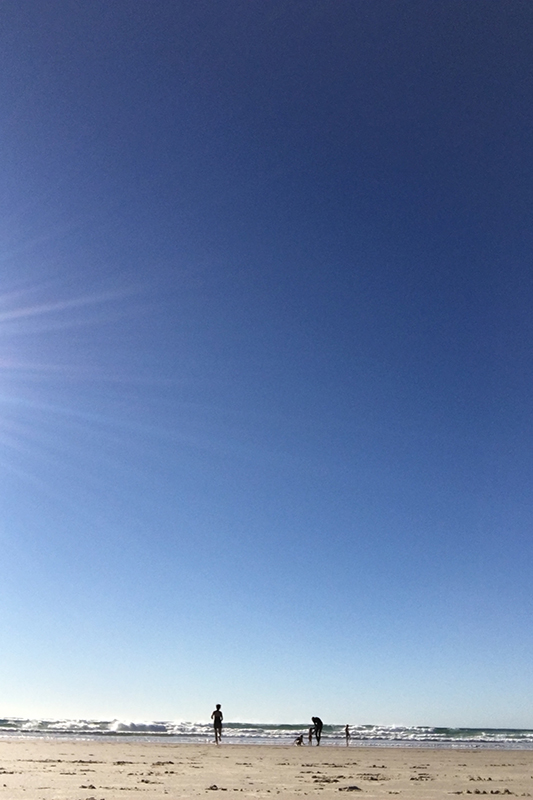 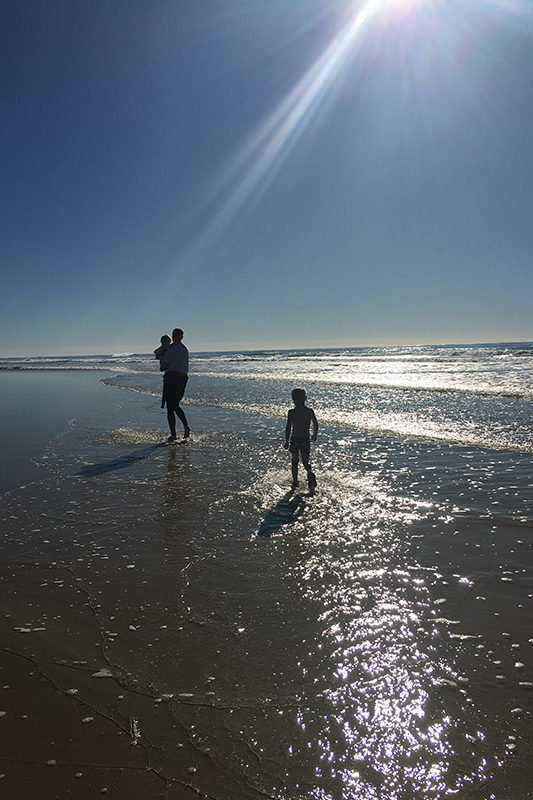 Since we had Travis for the whole day (and it was a Tuesday, too! I hate going to busy places on weekends!) we decided to brave the Lone Pine Koala Sanctuary. It's in Brisbane, almost two hours away, and I haven't felt comfortable making the long drive alone- especially not feeling well, but since this might be our only chance to go with Travis- we seized it!
The drive was really long, but thanks to the beach, the boys were already tired out and Grey and August slept almost the whole way- and so did I! Travis is the best! 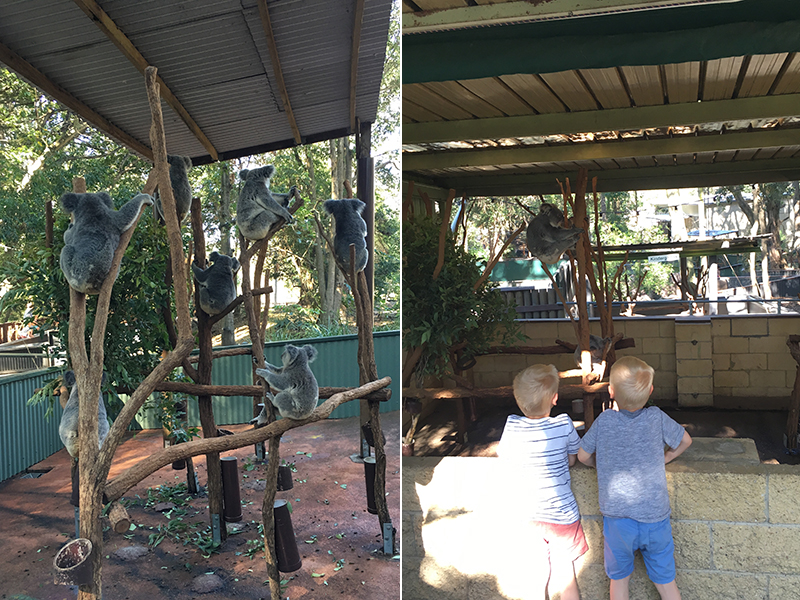 I also promised the boys that at the "Koala Zoo" they could each pick one special toy to remember our trip to Australia. Grey was quick to pick a fuzzy stuffed Koala that he named Koko. Micah debated between a stuffed kookaburra and a book about Australian animals- until he saw the boomerangs! He was so excited, he kept running out of the shop to show Travis before we paid. Afterward, he told me "Link (from Zelda) uses his boomerang to kill people, but I won't kill any people with this." He's been complaining for days that he doesn't feel safe without his toy gun here and he wishes I had let him bring it, but now he says that a boomerang is even better than a gun and when we get home, we can throw all the toy guns away!

There were a lot of really amazing animals at the zoo- we met several cockatoos that said "Hello," and "Bye bye!." And many, many other interesting birds. There are wild bush turkeys EVERYWHERE here, we see several a day and August loves them. They were running wild all over the zoo, too.
The lorikeets were especially fun- although all the boys got bitten by them! (They were trying to pet them, so it's understandable!)
They're little tropical birds with bright green backs and red-orange breasts. We got to visit the lorikeet feeding, where they essentially hand out plates full of the lorikeets' food to all the people and the birds come shrieking and twittering in from all over the park to land on people and eat their dinner. It was noisy and crazy, but very cool! 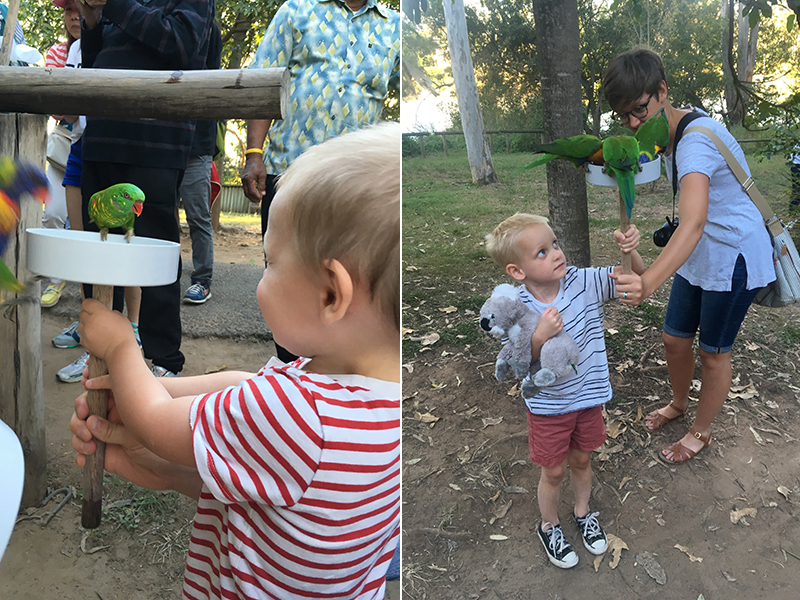 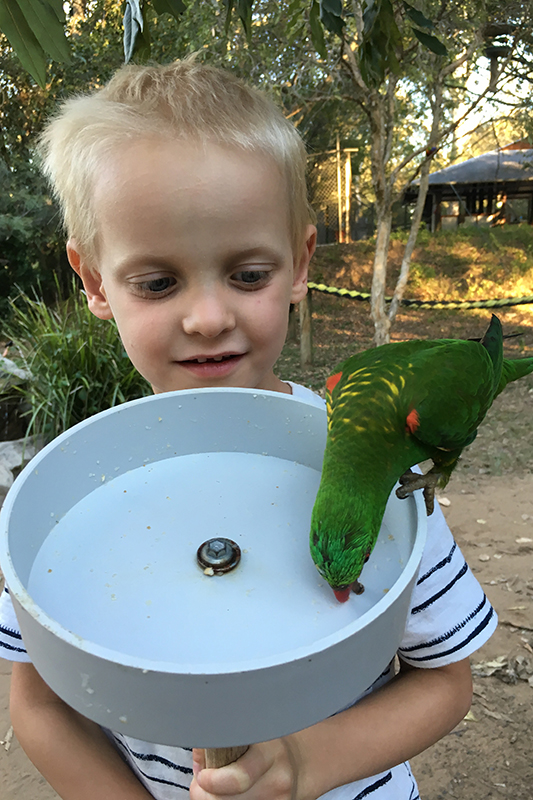 We saw the platypuses, which were so lively and swam all around their tanks, wriggling their little bodies. I was very surprised at how small the were. They were much smaller than ducks, about the size of a brand new puppy!

The dingos just looked like very pretty, lion-colored dogs. I thought they seemed bored and lonely. They're really just wild dogs- but raised in captivity, they're just dogs! They looked like they wanted to be pet and played with. I know at the Australia zoo, you can take them on walks! 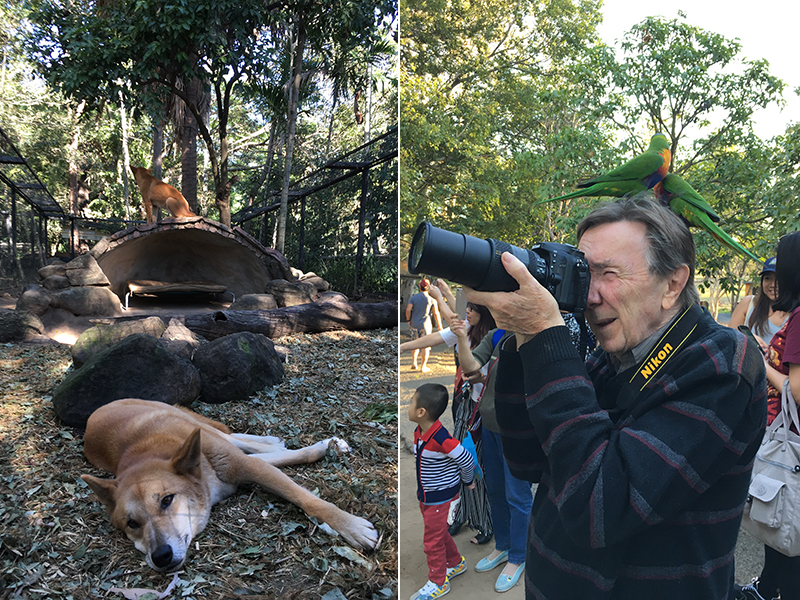 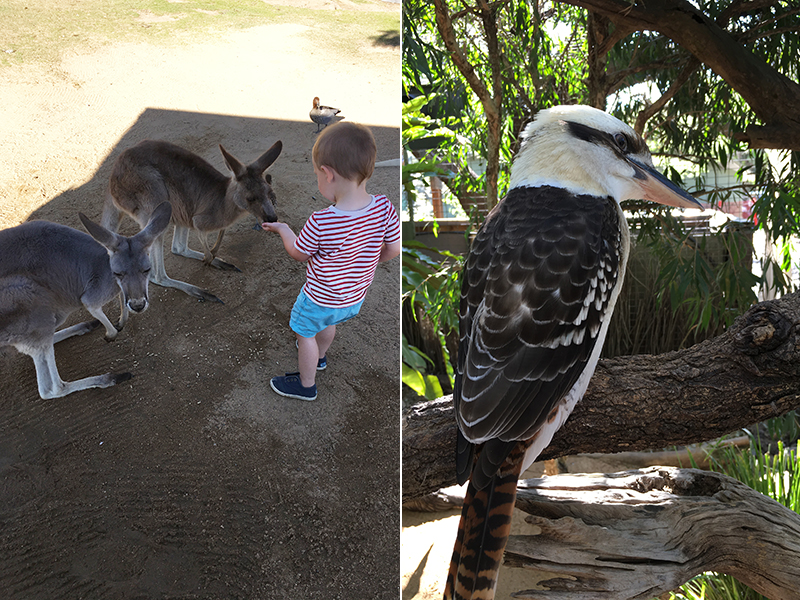 The koalas were smaller than I expected too. They were everywhere, and their cages were all open, so they could climb out and around if they wanted to. We were excited to take a picture with the koala, since it was advertised that if you paid for the professional photo, then you could have a few minutes to pet and cuddle and take your own pictures. But that didn't seem to apply to children. The keepers seemed panicked about the boys, so we barely got to hold it pat the koala at all! They hurried us through, and the koala peed on me! He was kind of a let-down, but the boys still liked it. 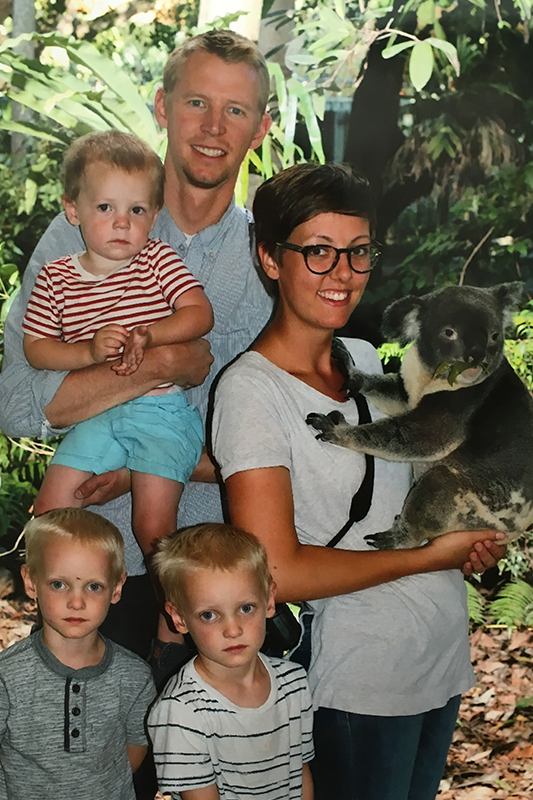 Haha, this totally looks worth $20 doesn't it?

There were also lots of lizards everywhere! Very few (except crocodile-sized ones) were in cages or tanks, most were just wandering around. We saw a few very big ones running around on the paths and laughed when other tourists saw them and SCREAMED! Haha!

The wombats were another Australian animal that were very fun to see (rather more exciting than the small, sleeping crocodiles). Before we saw them, I tried to describe them to the boys.  "Like a tiny pig-bear," I said. "Like a giant, fat bunny," said Travis. But after seeing them, I think they're more like tiny, fuzzy hippopotamuses!
They ran around on short stubby legs and dug lots of holes trying to escape their pens. 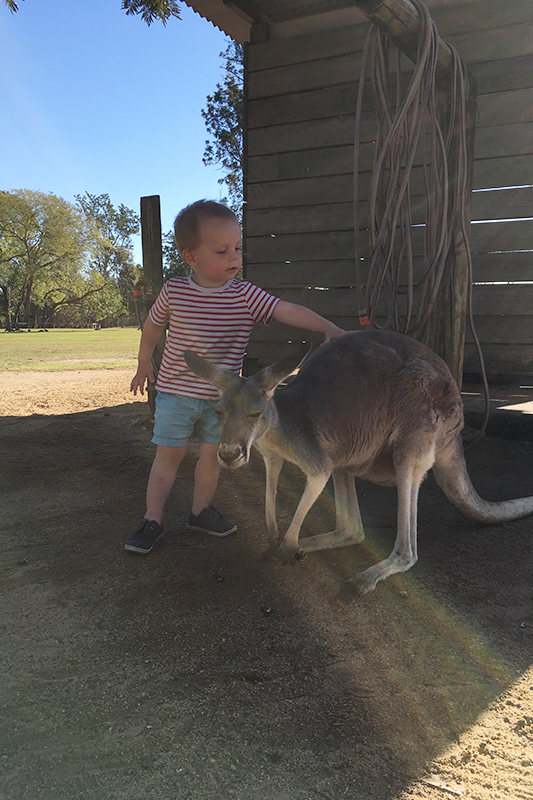 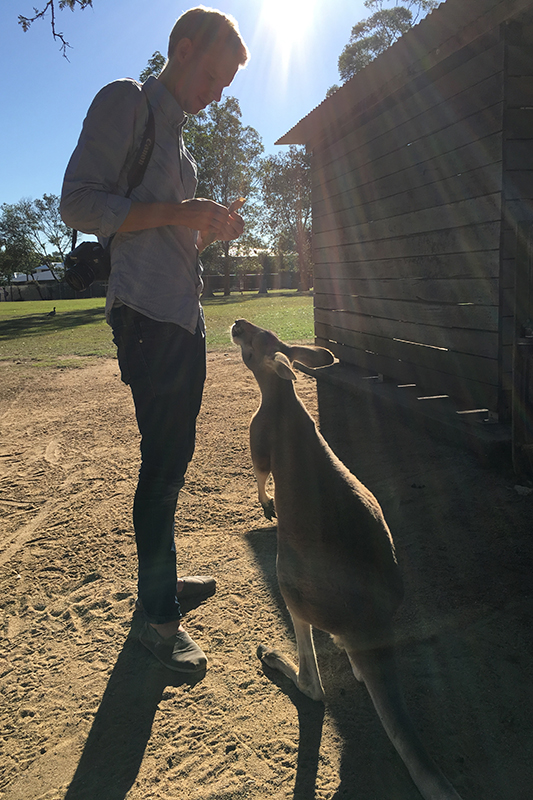 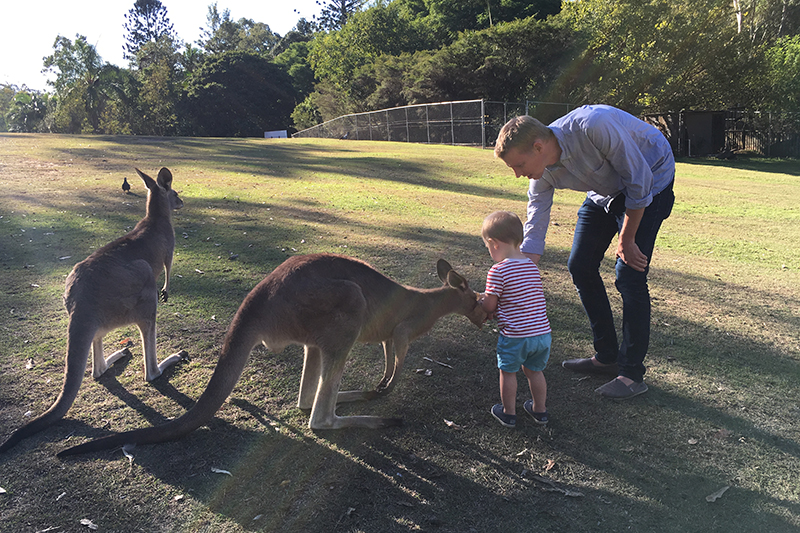 The most fun animal at the sanctuary though, was the kangaroo! The "kangaroo enclosure" was really a huge fenced field with picnic tables and everything. We were able to go inside and for a few dollars- were able to buy bags of kangaroo food (like the pellets you feed goats at a petting zoo!)
The kangaroos were friendly and small, and expected food- so they hopped right up to us! They let us pet them and hug them, they were so gentle and soft- much softer than I expected! They were like big, happy dogs- except that they didn't jump up on you. There were a few very large male kangaroos, but they weren't interested in us. They just lay stretched out sleeping in the sun. 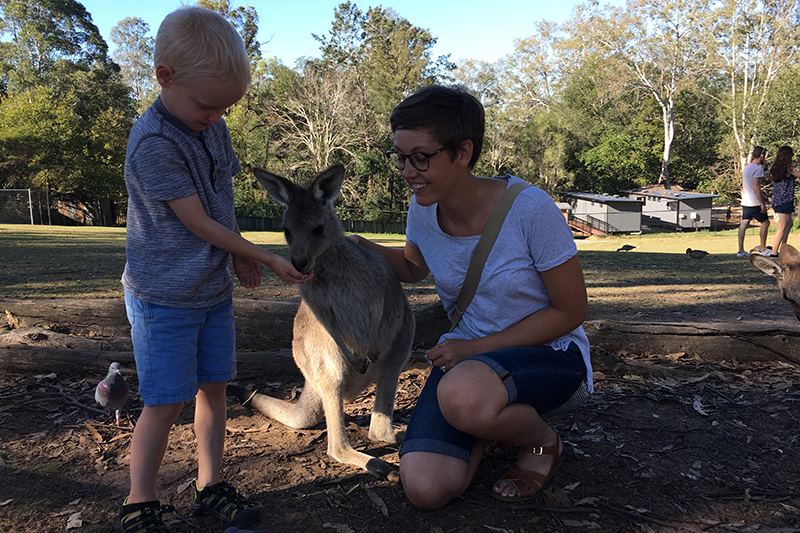 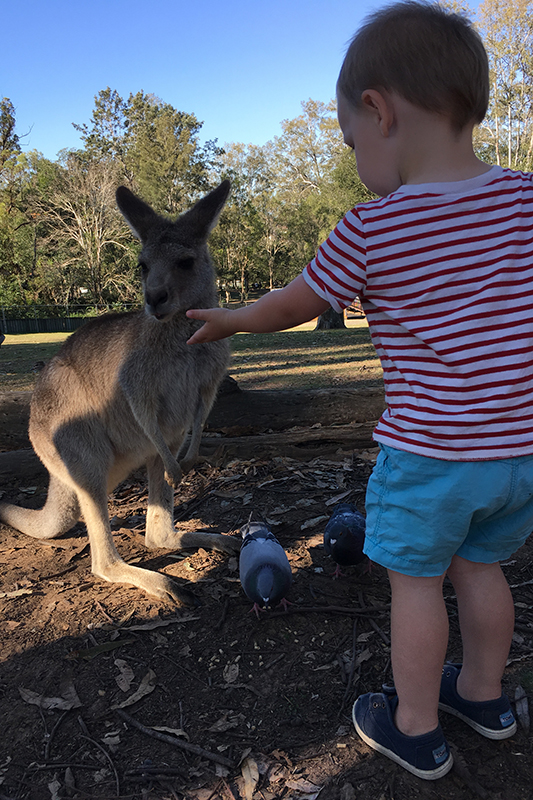 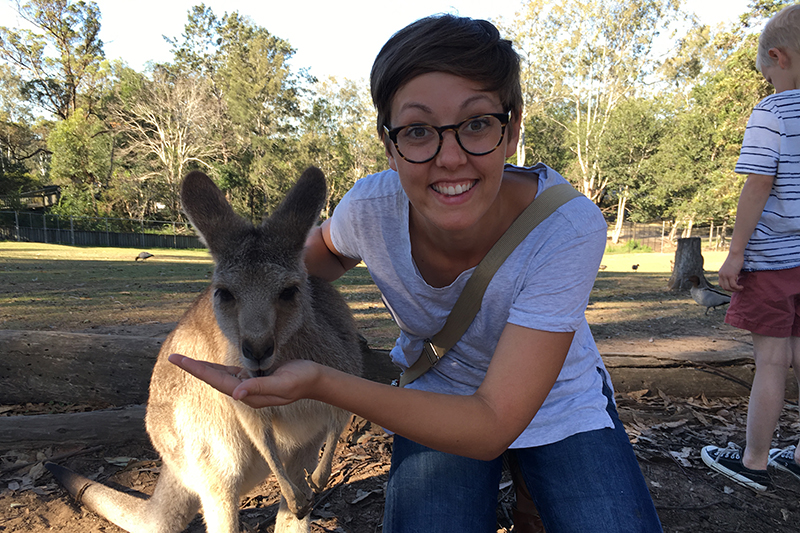 Joe called partway through the day and asked "How are you feeling?"
"Overwhelmed," said Travis, and I laughed! Here I was, thinking that the boys were being really good and the zoo was so easy with two adults instead of doing it by myself. I'm so used to outings with the boys that I don't usually think anything of it. Keeping track of everyone and feeding everyone and bring boys to the bathroom aren't a big deal, as long as no one is exhausted to the point of murder!
But I think he was really just stressed that he should be working while we were playing. I know it was hard for him to feel the whole day was "wasted," but it was a blessing for us!
The long ride home was hard after such a long day, even with snacks- so the boys watched Little Bear on the iPhones and we got home just in time to make scrambled eggs for dinner and send everyone to bed!