For some reason 8 months seems really old to me.  Maybe it's because I had friends with 8 month-olds when the boys were born, and I remember thinking that their kids were so much bigger than my own.
Maybe it's because I started reading and following {this blog} when her twins were about 8 months old, and I was expecting twins at the time.
I remember seeing them and trying to imagine myself in a year, with two 8 month old babies.
And now we're there.
We're that family, and they're those babies.  For over a year, whenever people would tell me that they were pregnant I'd think "Awesome! Our kids will be about the same age, they can hang out!" and now, my kids will be almost a year (or an entire year) older than any new babies. It's still pretty close, but suddenly... I don't have a newborn. I hardly even have babies! They think they're toddlers!
So eight months...sheesh. A lot has changed. 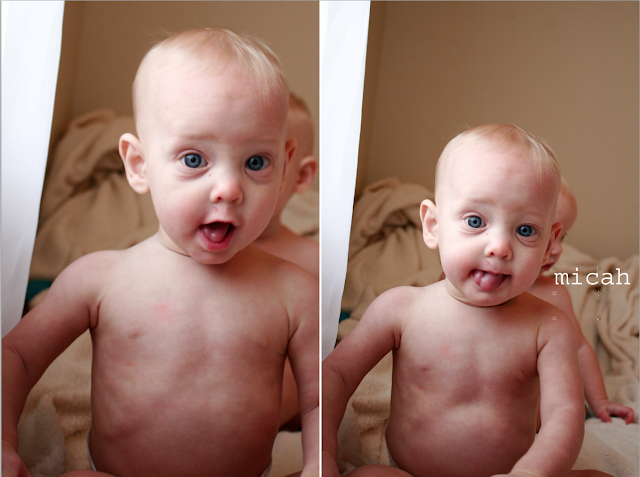 These boys can now crawl, sit, pull them selves up and then walk along furniture. Several times they've stood by themselves - completely unsupported - but only for a 30 seconds here and there.
The first time Micah did it was last week, he was in the tub and he'd decided he was done with his bath. He pulled himself up on the edge of the tub and then stood up straight with his arms above his head, reaching for my mom to come get him.
The first time that Grey did it was just a few days ago. I'd put a little pile of Cheerios on the floor for the boys to crawl over and eat. Grey was standing up at the couch a few feet away, and turned to look and lean over them. He turned, so he was leaning against the couch with his back, and then sloooowly leaned forward to see the food. He stood looking at it for a a few seconds before dropping and eating. 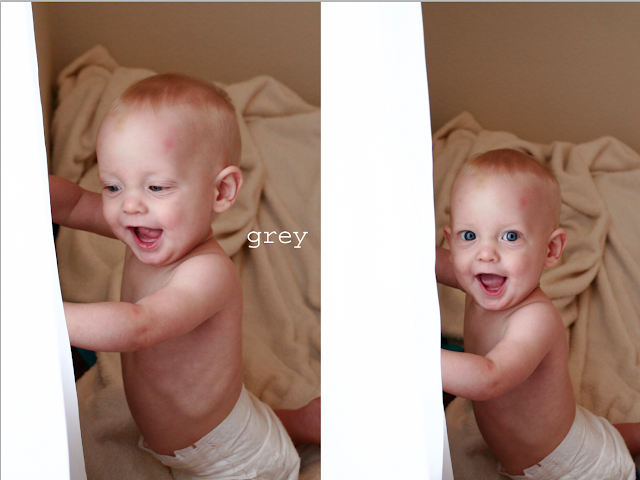 I've heard that lots of babies walk and stand on accident for the first few times, but I think that my boys are actively trying to figure it out. They pull themselves up to the couch, and then turn around, so just their backs against the couch and then LUNGE forward. They usually face plant, they occasionally save themselves by getting into crawl-position, and sometimes they tuck and roll.
Just kidding, they can't somersault. But soon they'll be able to  walk.
I'm almost positive that they'll be walking by this time next month.
Grey's new favorite way to sit / stand / crouch is in what I call "birthing stance" and Travis calls "Football stance." Travis' is probably more correct, since Grey keeps one hand (or a few fingers) on the ground in front of him, so he doesn't tip over. But he likes to crouch over his food (aka, piles of Cheerios on the floor) and eat them like that. 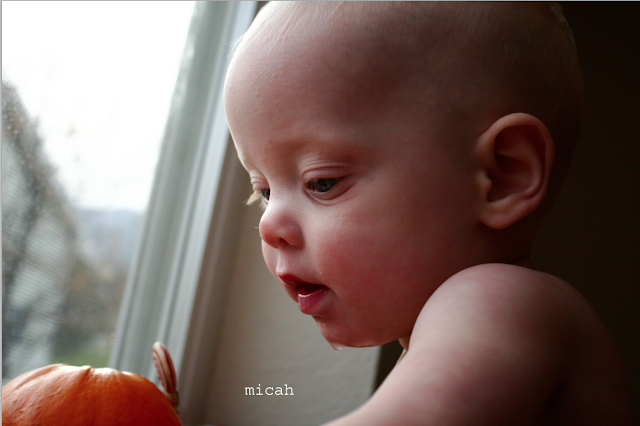 The boys crawl EVERYWHERE. They follow me from room to room, and if you make the mistake of standing still, the boys pull themselves up on your legs and won't let you walk away from them.
The other day, I carried Micah back to the room where he's been sleeping and Grey followed. When I shut the door, leaving Grey in the hallway, he started screaming and crying and clawing at the door. Obviously, Micah wouldn't sleep with all that excitement, so I had to carry Grey back to the living room and try again.
I'd barely shut the bedroom door, when I could hear Grey screaming - thundering down the hallway, and moments later he was banging on the door again. I finally got him to stay in the living room, by handing him my iPhone and then sneaking away while he was distracted.
They've become pretty possessive of their toys, and carry them around with them.  If they're having a hard time crawling with them in their hands, they put it in their mouths and carry the toy puppy-style. Micah is especially good at keeping toys from Grey, and the new favorite toy in my parents house is a "magic wand" shaped like a microphone that lights up and plays "Bibiddi-bobiddi-boo."
If one of the boys has the wand, he'll wave it around, bang it on things (like the metal lamp, which makes a clanging sound) and laugh with hysterical joy, while his brother looks on in horror. Micah goes absolutely crazy if Grey has the wand, literally screaming and pulling at his own hair and face.
Because Micah is so good at keeping the magic wand from Grey, Grey usually ends up playing with the second favorite toy: the keyboard.  He crouches over it (or sits on it), banging away on the different buttons and keys.
In just the last few days, I've also seen Grey pick up several different toys and hold them to his ear for a while and I can't figure out if it's because he's copying me being on the phone, or if it's because he has an ear ache. I'm thinking the former. 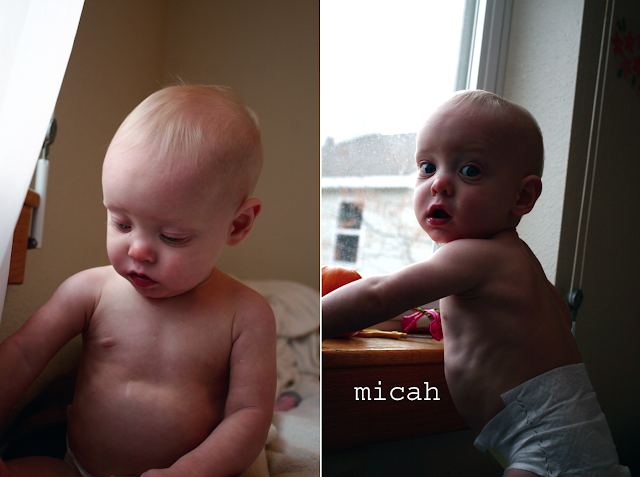 The boys still have no teeth, but they eat a variety of food now. They love oranges, mashed apples and peaches, and pickles. But it's a joke when I try to feed them veggies, like green beans. Micah is really into grabbing fistfulls of green beans and throwing them on to the floor, while Grey gets rid of his green beans, by putting them on to Micah's tray. I'm not sure if that's really intentional of not, but it's pretty funny.
And either way, all the green beans end up on the floor, instead of inside a baby's belly.
They now eat bottles like every three hours, but additionally eat a solid meal three times a day. They eat SO much! At least an orange a day, between them, and a can of formula every day. And in the week and a half that we've been here, they've gone through at least three jars of applesauce, one of pears, and one of peaches, and an entire box of Cheerios, in addition to all the noodles, crackers, baby "puffs," and bread that they eat.
I mean, DANG! 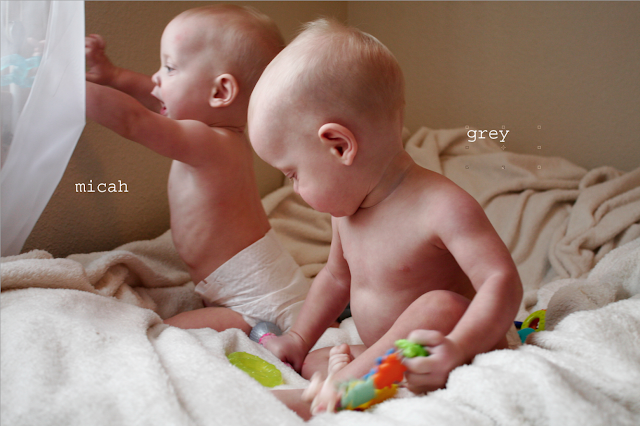 Micah seems to be figuring out that my mouth is the same as his, and he's a teeny bit obsessed with trying to put things into my mouth. If he's eating Cheerios, one goes into my mouth, one goes into his. If he's feeling especially gleeful about his magic wand toy, he'll sit on the ground in front of me, sucking on it, and then try to stick it into my mouth. Often it comes toward me trailing a string of spit and boogers. Yuck!
The boys LOVE peek-a-boo, jumping, and the swings at the park more than any other game or toy.
They love to hug, kiss and snuggle. And they want to sleep with us, and with their bottles in their beds.
Sadly, because they've been sick they've been sleeping kind of poorly - and I've been indulging them, by snuggling them, and giving them bottles in the night. Micah ends up spending half the night (about every other night) in bed with my parents.
I guess we'll have to re-sleep-train a little when we go home.
By far, the cutest thing that they've started doing is playing together.  They still don't understand how to share toys or really play together, but they crawl and laugh together and every time that it happens I want to burst into tears because it's so sweet. For example, my parents have a long hallway that they love to crawl up and down in, and sometimes they're playing on opposite ends of the hall, and then turn and see each other. They'll make eye contact, and then start laughing hysterically and crawling towards each other, smiling, laughing, and talking while they crawl. They usually plow into each other and start crying, but the beginning part is so freaking darling.
Sometimes I'll hear them and peek into the hall to see them crawling along together, side by side. Laughing.
It just melts my heart. I love when they want to hug and kiss me, but there's something so wonderful about seeing them want to love each other.
Sorry this is long, the boys are just learning so much, every single day and I don't want to forget anything. I want to know just how and when they learned to stand, and what they did with their time.
Which is why I take about 1,000, 000, 000 pictures and videos a day.
And write extremely lengthy posts.
Even now, I keep thinking of things. Like if you hand them a burp cloth or napkin, they wipe their faces! CUTE.
Or when my mom or Kathryn leave the house, they crawl to the door and cry after them.
Seriously. They are so sweet.
Click to give us a birthday vote? (Or as Travis calls it, a "month day" vote.)

Woah! I can't believe they're 8 months already! You're right, they've grown up so much. They are still adorable little boys!

I love these pictures! Ridiculously adorable! Can you do a post about your bedtime routine? (your normal bedtime when travis is home to help you...?) like what you do, what time you do it, and when they wake up, etc. love your blog!
Sara
sarjobran.blogspot.com

Oh my goodness, I don't ever want you to go home. Not because of you, but because I love these babies! I might not be able to live without them now.

I love your blog! and I cannot believe how your babies are growing up so fast. They are too adorable!

Cute babies! You take such great pictures of them.