Nope, you're not dreaming! It's a real blog post. 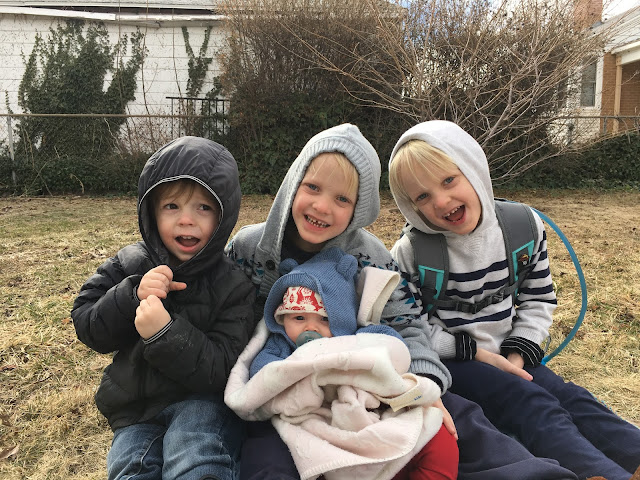 Louise was been losing her ever-loving mind for the ten minutes and August sprinted into our room, screaming "DONT CRY, LOUISE!"
But as he neared the bed, he tripped over a pair of shoes and flew through the air and into the wall. So he started crying.
I set Louise down and scooped him up and said, "Don't cry, August!" and he pulled back and glared at me and growled "I'm not a crying! Say, 'Don't cry, LOUISE.'"

Travis said the bedtime prayer and August started yelling "Bless Peter Puffin! Not robin! Peter Puffin!"
Peter is his stuffed Puffin, who currently goes everywhere with August and needs his own silverware at the dinner table. Robin is Micah's stuffed bird of choice.
We are into birds here.

We had our new furniture delivered when there was snow on the ground. One guy came with it, but another mover was supposed to meet him. So he was waiting in his truck. He came to the door and asked if he could do anything to help me. Maybe shovel the driveway?
So he did. He was very sweet and young and cute.
Micah watched him from the window, "Wow! He's so nice. He must really want to live with Heavenly Father again."

August loves fruit leathers- and regardless of where I hide them, he finds them and binge eats many in a row. I moved them into a new cupboard.
August looked in the cupboard where they had been earlier and then turned to me sadly and said, "I'm sorry. We've lost them."

Micah tried to distract Grey and called, "Oh look! A dying fish is behind you!"

Micah gave travis a "Good Job" sticker and said, "This is for you, because you have a good job."

Micah: I love it. It's gonna boil my mind right out of my head, I love it so much.

Travis: Ow! Hey! August just bit me on the chest!
Grey: Just talking about that makes both of my right-heres hurt. My nipples, I mean. Did he bite your nipples?

Grey: What character will you be in my play about Link?
Micah: Well, I have a beautiful face like Zelda, but i don't want to be a girl.

Micah: You should Google it!
Me: Really? What does Google mean?
Micah: I don't know. To bring something back to the store after you've bought it?

Grey: I love Jesus more than anyone else does!
Me: That's not okay to say, honey. You love him very much, but you can't see inside other people's hearts.
Grey: Well, Doctors can!

Me: You put Louise to sleep! Thank you!
Grey: It's easy! All she needs is a little bouncing and something to chew on.

Grey: I do look a lot like Link.
Micah: And when we use our imagination, you look EXACTLY like him!

Grey: Today when I was eating lunch, I pretended I was a hunter and I had shot an animal and was eating it's meat and other squishy parts.

Grey: Jesus is quite magical.

Micah: August is a little like Gollum, because he's tricky and likes to hurt us- but he doesn't try to eat us, and he can't sneak up on us like Gollum could.

Grey: This movie is getting sad. I'd like to invite you to join us in the living room.
Me: No, thank you.
Grey: Please? I'm a little worried.
Me: No, thanks.
Grey: Just one quick question then: does Wilbur get eaten?

Micah: How many sausages are left for you guys?
Me: Well, there's only one and I'm going to eat it. So Daddy won't get any.
Micah: Why?
Me: Well, Dad loves me and he'd tell me to eat it anyway. So I'm going to.
Micah: and THAT is why we love him the most.

Grey: Do you know why Harry Potter didn't die?
Micah: He was famous.
Grey: No, he was famous BECAUSE he didn't die. He didn't die because his mom loved him so much.  Love is more powerful than bad magic.

Micah: Is this scorpion meat that we are eating?

Grey: Hey, Baby! Take THAT, Baby!
August: No! I NOT Baby-Take-That.

Grey: What a fierce brother I have!

Me: What should we write in your letter to the senator?
Micah: Hello, my name is Micah. My favorite color is blue. I think-
Me: Wait. Do you remember what this letter is about? It's supposed to be about refugees.
Micah: Oh, that's right. I'll say, "Hello, I am sorry to hear that Mr. Trump lets Satan tempt him."

Micah: When I go rock climbing, I need to wear this shirt because it's full of courage. It gives me courage to climb all the way to the top.

Micah: Knock knock.
Noelle: Who's there?
Micah: Robin
Noelle: Robin Who?
Micah: Can I peck your house to crumbs?

Grey: Even when my hair is crazy, my eyes are blue like diamonds. And even bluer than your eyes, of course.

August: I want to do yoga with me, Auggie.

Travis: There was a little boy running through the woods, as fast as he could. His name was-
August: AUGGIE!
Travis: And as Auggie was running through the trees, he suddenly found-
August: a grocery store!
Travis: So Auggie started looking for something. He looked all over, and then he saw it! It was-
August: A treasure chest!
Travis: Then the manager of the store came over, and he saw Auggie and the treasure chest and he said-
August: "I want the gold!"
Travis: Then he said, "Will you trade me this grocery store for the gold in your treasure chest?" Auggie thought about it, and then said-
August: YES!
Travis: So Auggie gave him the gold and became the King of the Grocery store.

Micah: she almost put all of her hands in my nose, because her hands are so tiny and my nose is SO BIG.

Grey: This marketplace is called a Bazaar, because everything they sell here is very strange.

Grey: What are those white birds called?
Me: Um, pigeons?
Micah: NO. Like they sacrifice at the temple!
Me: Doves?
Grey: Yes! Thank you.
(Note: Mormons do not sacrifice animals in their temples! Micah was referring to Biblical stories of temple sacrifice.)

August chatting to himself in the bathtub:
"Oh, naughty ducky! You are in time out! YES, you stay in time out! Right NOW!"
"What's a behind this door? Bikes! Bikes a-hind this door! Let's ride them!"
"Louise and me eat a this! Nom nom nom! Yummy! Louise eat a this! It's yummy! Louise likes it!"
"Where is it? Let's go find it! Auggie find it!"
"No, Daddy! I need you, my daddy! You MINE Daddy!"
"Shhh, I love you. Ni-night. Ni-night! Twinkle twinkle. Awaaaaaake! Oooh morning! Good morning!"
"No! This is mine baby! That is yours baby!"

Me: Ugh, what's that smell?
Micah: Probably you. You never shower.

Grey: Okay, someone didn't flush the toilet. You guys, it's disgusting! And this is the last time I'm going to talk to you about it. From now on, let's all agree to FLUSH.

Grey: Who is Hitler?
Me: You know who Hitler is, think about it and see if you can remember.
Grey: Umm... Donald Trump?

(Grey knows that obviously, the smaller something is- the cuter it is.)
Grey: You're even cuter than a crumb that's so small it's invisible! You're the cutest girl in the whole university!

Grey: I wish I was a grown up when we went to Australia. Then I could buy my own submarine and explore the coral reef.

Micah: Oh! A dollar! Now I don't have to earn one!

Micah: We'll get baptized when we are eight, right?
Me: Yes, you can if you want to.
Micah: Of course I do! Otherwise they'll have to do a baptism for me at the temple after I'm dead.

Grey: After this, let's play a game because I'm going to be filled with so much hyper.

Micah: I didn't have time to make any friends, but I did have time to put a lot of sand in my hair. So i did.

Micah: Grey threw dirt at me, just because I threw dirt at Auggie!
Me: Sounds like you threw dirt and it taught your brothers that you love to have dirt thrown, so they were doing it because you did it.
Micah: NO. Grey did it because Dad told him to- to teach me a lesson.
Me: And what did you learn?
Micah: NOTHING.

Grey: Mom! It's Saturday! It's your birthday! Not your real birthday, your present-birthday, which is even better!

Micah: Dad is trying to get his hat, which I accidentally threw on the roof.

Grey: Can I jump on the trampoline naked?

Micah: You're beautiful! And you're even more beautiful when you smile.
Me: Thank you!
Micah: You liked that?
Me: I did.
Micah: Thank you for liking that.

What conclusion am I to come to regarding the negative comments about Trump? Yes, that's the conclusion I came to. Hmmm. Truthfully, I am dubious about him as a man, but I've not recognized Hitler in him. We all need to pray for him and our nation.
Sorry if I took this too seriously.